My friend and fellow independent filmmaker Ben Hozie has just released his latest film, the "video comedy of errors" THE LION'S DEN, available for free streaming on vimeo. This is a very funny and on-point satire about a group of Staten Island revolutionaries who plan to kidnap a high-power corporate CEO, but instead pick up a low-level accountant by mistake. And that's just the beginning, as the group of radicals begins to devolve into in-fighting and romantic jealousies.

You can learn more about Ben's other film projects at his website, Pretorius Pictures. 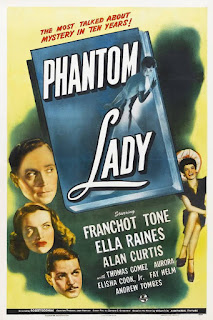 PHANTOM LADY is an atmospheric little thriller from Universal in 1944, directed with great visual flourish by Robert Siodmak. The premise is intriguing: a man's wife has been murdered, and the only person who can provide a concrete alibi for his whereabouts at the time -- an unknown female companion wearing a distinctive hat -- has completely vanished into thin air; even the witnesses who remember the man's presence in the bar, in the cab, etc. the night before swear that he was alone. When he is sentenced for his wife's murder, time starts running out to identify the woman and clear the husband's name.

This is the kind of sleek, economical picture the studios could do so well in the '40s, with the pistons firing on all cylinders -- unpretentious yet stylish, with a good cast and a smart script. Franchot Tone delivers a good performance with tongue just enough in cheek to suggest he doesn't take the proceedings too seriously, while Ella Raines and Alan Curtis make an appealing and earnest leading pair. There's a fun nightclub number, too, performed by Aurora Miranda (Carmen's sister). And Elisha Cook Jr. is in top form as a sleazy jive band drummer -- in one scene, he pounds away feverishly at his drumkit, obscenely stroking away so furiously that he appears on the verge of either a heart attack or an orgasm.
Posted by Matt Barry at 8:55 PM No comments: