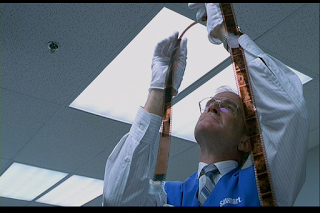 Robin Williams has one of his finest dramatic roles in this offbeat thriller about a lonely, psychologically disturbed photo developer, who becomes obsessed with the family of one of his regular customers, and turns dangerously unhinged when he learns that there is a dark side to the family's seemingly picture-perfect existence. This premise makes for a gripping and effective character study and suspense thriller, building an understated but deeply unsettling tension through Williams' pathetic efforts to ingratiate himself with the family, though it runs out of steam during the last half hour or so. Williams' performance is at once chilling and heartbreaking. Good supporting performances by Connie Nielsen, Michael Vartan, and Gary Cole as Williams' unsympathetic boss.
Posted by Matt Barry at 11:15 PM 1 comment: 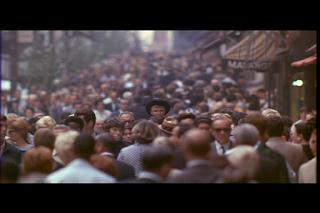 One of the truly great American films of the 1960s, as uncompromising and honest a film as has ever been produced by Hollywood. Director John Schlesinger draws on his experience with British "Kitchen Sink" dramas, deliriously combining a New Wave sensibility with the influence of underground, experimental filmmaking, to create a landmark of the New Hollywood cinema. Jon Voight and Dustin Hoffman give perhaps the finest performances of their careers as two men who form an unlikely bond on the gritty streets of late '60s New York. Greatly enhanced by a beautiful John Barry score and the haunting theme song by Nilsson.
Posted by Matt Barry at 11:07 PM 1 comment: 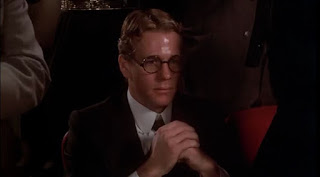 A loving, spirited tribute to the rough-and-tumble early days of picture-making, Peter Bogdanovich's NICKELODEON is a flawed but interesting and often entertaining film based partly on the colorful experiences of pioneering filmmakers Allan Dwan and Raoul Walsh.

Ryan O'Neal stars as a Chicago lawyer who gets mixed up with an independent motion picture company and reluctantly takes over as director of their latest production shooting out west, and Burt Reynolds as a jack-of-all-trades who reluctantly becomes the company's new star after being sent by the Patents Trust to shut the production down. The fine ensemble cast includes Tatum O'Neal, Brian Keith, John Ritter, Stella Stevens, and Jane Hitchcock.

The film drags in spots, not helped by some laboriously-executed slapstick scenes that go on too long, but overall it's a great deal of fun, clearly made with a great deal of affection and knowledge of the period. The bittersweet ending, taking place at the premiere of The Birth of a Nation, beautifully encapsulates the emotional rollercoaster of the filmmaking process. After witnessing such a brilliant film, O'Neal is simultaneously enthusiastic about the artistic triumph it represents, and dejected by the realization that he will never make anything as good himself. But just as soon as he's contemplating giving it all up, he witnesses a film company making the movie, and the excitement all comes back to him. Not quite up to the standards of Bogdanovich's best films of the early '70s (particularly The Last Picture Show and Paper Moon), NICKELODEON is nonetheless an admirable and ambitious effort, and certainly one of the best films-about-filmmaking.
Posted by Matt Barry at 10:30 PM No comments: 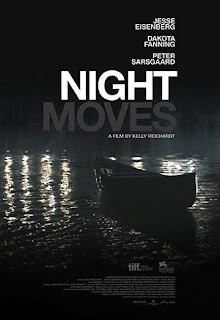 A tense, deliberately-paced thriller, directed and co-written by Kelly Reichardt, about a trio of environmentalists who blow up a dam, and the resulting moral dilemmas they face in the days following the act, dealing with the consequences of their actions and the unexpected effects it has on each them.

Reichardt is one of the most interesting filmmakers working today, and NIGHT MOVES may be my favorite of her films. From the outset, she establishes a great sense of atmosphere and pacing, which builds to increasingly heightened tension as the plot takes unexpected turns, invested with well-drawn characters acted by a fine cast including Jesse Eisenberg and Dakota Fanning. NIGHT MOVES is both a penetrating character study and a surprisingly gripping suspense drama.
Posted by Matt Barry at 11:45 PM 1 comment:

I had the opportunity to see the new BFI restoration of Barry Lyndon at the Charles Theater in Baltimore on December 2nd. This is a film that absolutely cries out to be seen on the big screen, where the rich, painterly qualities of Kubrick's detailed compositions can be fully appreciated. There is not a dull moment in the film's 184 minute running time, telling the thoroughly riveting story of a young Irishman's fortuitous rise to the top of the British aristocracy, and his equally steep downfall. Ryan O' Neal gives one of his finest performances in the title role, and the film can rightly be called a masterpiece thanks to the singular vision of Stanley Kubrick, who directed, produced and wrote the script (from the Thackeray novel).
Posted by Matt Barry at 5:32 PM No comments: 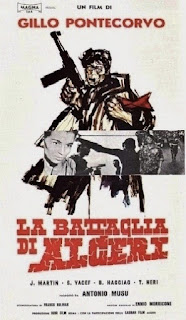 Gillo Pontecorvo's historical drama about the resistance movement against the French occupation of Algiers in the 1950s remains one of the most explosive, powerful films of its kind. Filmed with a documentary-like realism, Pontecorvo fills the film with unforgettable, disturbing images that hold nothing back. It's an absolutely bold, fearless film that is also remarkable for its objectivity in presenting the perspectives of both the French military and the FLN. Pontecorvo creates a heightened sense of dread and terror, of violence and catastrophe about to erupt at any minute, most effective in the expertly-timed, highly suspenseful sequence in which a series of bombs are planted in various public places throughout the city, and detonate in short order (recalling the similarly anxiety-inducing sequence of an anarchist's bomb exploding on a crowded London bus in Hitchcock's Sabotage).

Stylistically, the film resembles the post-war Italian NeoRealist cinema, especially recalling the films of Rossellini such as Open City, and at times feels like it could be a kind of late entry in that tradition of filmmaking in terms of its masterful combination of powerful filmic and political ideas.

Epic in its scope and scale and timely as ever, The Battle of Algiers, is rightly called a masterpiece.
Posted by Matt Barry at 12:13 PM No comments: