This 1931 travelogue of Hollywood is notable for having been shot in the Cinecolor process, providing rare color glimpses of the Movie Capital in the early '30s. Highlights include nighttime footage from the premiere of Frank Capra's Dirigible at Grauman's Chinese Theater, aerial views of the Hollywood Bowl, and the Hollywood Chamber of Commerce building. Perhaps due to time and budgetary constraints (the film was made by the British company Wardour Films), the travelogue refreshingly offers fewer views of the iconic sights of Hollywood typically found in these types of scenic films, instead presenting quotidian views of the town's houses, streets and churches that serve as a valuable cinematic time capsule.
Posted by Matt Barry at 6:08 PM No comments: 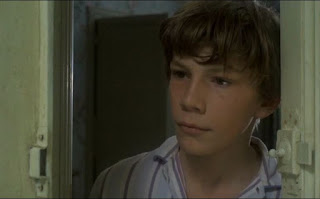 MURMUR OF THE HEART (1971, dir. Louis Malle) -- Finally got around to seeing this controversial but powerful coming-of-age story about a precocious middle class boy in 1950s France. His burgeoning adolescent escapades are cut short by a heart murmur, and he is sent off to a sanatorium with his mother, where things take a much darker and unexpected turn. Sensitively directed by Louis Malle (whose films I always find worthwhile), I was struck by the honesty in his handling of the material, especially in the film's painful and shocking climactic scene. The film's low-key energy is enhanced by an excellent jazz score featuring Charlie Parker, Henri Renaud, and Gaston Frèche. Starring Lea Massari, Benoît Ferreux, and Daniel Gélin; written and directed by Louis Malle.
Posted by Matt Barry at 9:59 AM No comments: