Film Review: Brotherhood of the Popcorn (2015) 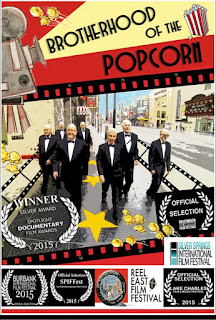 Brotherhood of the Popcorn (2015) is a nostalgic, touching, and often warmly humorous portrait of "The Cliffhangers", a group of senior citizen film buffs who meet twice a month to screen their favorite classic films -- especially serials, Westerns and Film Noirs. A lively and entertaining documentary about a group of film buffs and their love of cinema, it has all the elements of a good film itself.

The film conveys the real sense of friendship that exists between the members of "The Clffhangers" themselves: Woody Wise, Eric Harrison, Bill Exter, Rocky Sportelli, Richard Mottern, Dennis Penna, Jack Tuerk, and Tim Walker. Over the course of the documentary, we learn about each of the men, about their lives and their passions, and what draws each of them to their love of cinema.

Watching how much film means to each of them, and how it has served as a driving force in their friendship over so many years, it is really a testament to cinema's power to convey timeless stories and larger-than-life images that stick in our memories over the years, and how much they mean to us in our lives.

Anyone who loves movies knows that a big part of the fun is watching them with other people and sharing that experience together, and that's why movie buffs will enjoy watching "The Cliffhangers" come together at Woody Wise's house, catching up over donuts and coffee, paging through classic movie magazines and reminiscing about their favorite films and stars, before settling in to Woody's screening room, with its own projector and big screen, and the walls decorated with vintage movie posters. It's hard to think of a better way to enjoy a movie then with your friends in your own private cinema.

Highlights of the documentary include an appearance by the late, great Peter O'Toole at the TCM Film Festival in Hollywood, and a visit to the Lone Pine Film Festival, where Woody Wise volunteers each year as projectionist. This is probably my favorite segment of the film, showing off the unique landscape and breathtaking vistas of the Alabama Hills in the area, which have been used as a filming location in countless Hollywood Westerns over the years. Watching that segment of the film makes me want to visit Lone Pine myself someday!

I should mention that although Brotherhood of the Popcorn was released back in 2015, it took me a while to catch up with this film. I'm glad that I finally did. I rented it to stream on Vimeo a few months ago and recently found myself wanting to watch it again. It still captivates on repeat viewings.

Ultimately, Brotherhood of the Popcorn succeeds as a beautiful tribute to the magic of movies.

Brotherhood of the Popcorn was produced by Predator Productions, directed by Inda Reid and executive produced by Woody Wise. Visit the official website here. You can buy the movie digitally to stream on Vimeo here.

Lawrence of Arabia (1962): An Appreciation

I wrote this article in November 2015 for a friend's independent film zine in Brooklyn. It is an account of my re-visiting David Lean's film Lawrence of Arabia (1962) in 70mm -- for the eighth time -- at the Museum of the Moving Image in Queens, during the summer of 2015. 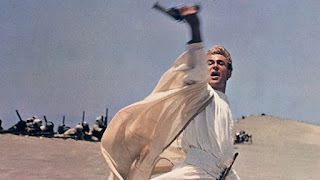 On a warm summer night in August, I made the trek out to the Museum of the Moving Image in Queens for what would be my eighth time seeing David Lean's Lawrence of Arabia projected in 70mm. The Museum of the Moving Image was having a festival of 70mm films called “See it Big!” and even after having seen Lawrence seven times previously in that format over the years, I knew that I could not pass up the chance to see it again.

I settled into my seat and as the opening timpani beats of Maurice Jarre's overture rolled out across the theater, I was overcome with a sense of familiarity toward the experience. Even though I was sitting in a theater in Queens in 2015, mentally I was transported back to my very first viewing -- which remains perhaps the single most powerful moviegoing experience of my life. 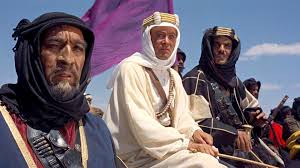 I had come across Lawrence of Arabia almost by chance in the fall of 2002. I was still living in Maryland, just 18 years old and recently enrolled college. Living only an hour away, I began to get out and explore more of the movie options that Baltimore City had to offer. The Senator showed mostly first-run movies, but occasionally played classics. An historic theater dating from 1939, it remains a beautiful venue and a great place to see movies on the big screen. I saw that Lawrence of Arabia was playing there soon and so I ventured down to the theater to check it out. I had never seen the film before, aside from a few snippets here and there, and I felt that I owed it to myself to see it properly, since it was being shown in 70mm.

I was not prepared for what a totally overwhelming experience it would be. I had never seen a movie that big before, one that seemed to present a larger-than-life world that existed beyond the confines of the screen. As a budding filmmaker, I was in awe of David Lean's direction – in fact, I had difficulty imagining how one man could “direct” such a massive production. I still do, actually. Imagine looking through the viewfinder of the camera and seeing the seemingly endless desert landscapes and thousands of extras! I was so moved by the experience that I went back to see the film four more times during its run, dragging everyone I could get to come along with me to see it.

Flash forward five years to the fall of 2007. By this time I had graduated from film school and started making films of my own. I saw that Lawrence of Arabia would be returning to the Senator, in all its 70mm glory. I ended up going to see it twice during this run, remaining just as overwhelmed by it as I had been the first five times. It was an experience that felt very familiar to me – especially seeing it in the same theater – but this did not lessen the impact film had on me. If anything, it strengthened it and I found myself thinking about how much the film meant to me -- how much it inspired me. 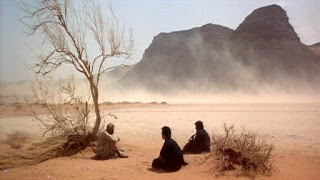 These thoughts ran through my mind as I prepared to see Lawrence of Arabia for the eighth time. A lot had changed in my own life in the eight years since I had last seen the film. I had moved to New York and was working in the distribution end of the film business, while continuing to make my own films. I couldn't help reflecting on all the changes that had occurred in my own life as I listened, with my eyes closed, to the familiar music of the overture booming throughout the theater. As the house lights came down and the curtain opened, I found myself once again drawn into David Lean's masterpiece.

This time, however, it played like a familiar memory rather than the totally overwhelming, visceral experience it had been for me in the past. The film is certainly just as impressive as ever. I don't mean to suggest that my opinion of it has lessened in the intervening years. After all, the film hasn't changed; I have. It's difficult to put my finger on, but perhaps the experience of seeing the film has dulled somewhat due to my familiarity with it. But my reaction did serve to remind me how our circumstances, and the place that we are at in our lives at the time we see a certain movie, can affect our reactions as much as anything about the film itself. I look forward to my next encounter with Lawrence of Arabia at some future date so that I may see how it holds up for me at that point of my life.

One thing is certain: when I do re-visit the film, it will have to wait until I have the opportunity to see it projected in 70mm again. Seeing Lawrence of Arabia in that format remains one of the defining moments of my life, giving me a whole new appreciation for the presentation of movies, and inspiring me in my own work. Even though I own copies of the film on DVD and Blu-ray, it is one movie that I cannot imagine watching anywhere than on the big screen – the way it was meant to be seen. To see it any other way would be like watching a different film.


***
Thanks to Ben Hozie for permission to re-print this article here.
Posted by Matt Barry at 7:58 PM No comments: