Along with D.W. Griffith and Cecil B. DeMille, Ince was one of the key figures responsible for making Hollywood the production center of the American film industry. Less well known today among casual film enthusiasts than either Griffith or DeMille, Ince did not make the same artistic impact as Griffith, nor did his career have the decades-spanning endurance of DeMille, but during the 1910s, Ince was a versatile powerhouse of filmmaking, responsible for over 600 movies, as either producer, writer, or director (and sometimes all three). His most well-known film today is probably the epic anti-war film CIVILIZATION (1916), though he is also highly regarded for his significant contributions to the Western genre, so much so that he came to be known as "The Father of the Western".

In 1912, Ince built a massive studio, named "Inceville", which was the first all-purpose film studio built in Hollywood; and in 1915, he partnered with D.W. Griffith and Mack Sennett to form the Triangle Motion Picture Company, one of the first studios to handle both production and distribution (the studio itself was located at the current site of Sony Pictures). Later on, Ince was briefly involved with Adolph Zukor in the formation of Paramount, but desired to return to working independently.

By the early 1920s, Ince was no longer quite the heavy hitter in Hollywood that he'd been a decade earlier. His life came to an abrupt and tragic end in 1924, while aboard the yacht of William Randolph Hearst, under circumstances that remain unclear to this day, due to conflicting reports from all involved. Likely due to his untimely death, and the fact that he was not easily identified with key landmark films of the silent era in the way that Griffith, DeMille, and certain other directors were, Ince's legacy tended to fade from film history, but he made a tremendous impact on the Western genre, on the development of the American film industry, and on the studio system model that would make Hollywood the center of that industry.
Posted by Matt Barry at 10:47 PM No comments: 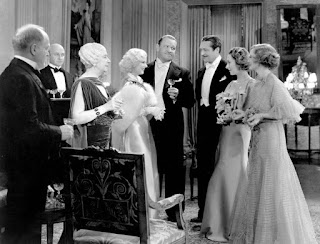 Wonderful, sharply-written ensemble comedy-drama following the individual stories of different characters attending a high-society dinner party, which interweave to create an alternately witty and funny, solemn and even tragic tapestry of the human condition. 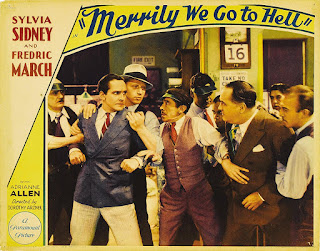 Pre-code melodrama about an alcoholic writer -- played by Fredric March -- and his disastrous marriage to Sylvia Sidney that leads to tragedy but ultimately redemption. March delivers a fine performance that prefigures his performance as Norman Maine in A STAR IS BORN five years later. Directed by Dorothy Arzner.
Posted by Matt Barry at 9:25 PM No comments: