Laurel and Hardy are a pair of tramps who seek refuge in a mansion while its owner is away, but a wealthy couple soon shows up to rent the place, so Hardy poses as the millionaire with Laurel posing as both butler and maid, in an effort to keep up their ruse.

This was the film in which Leo McCarey recognized the comedians' potential to work as a team. What's remarkable is how fully-formed their characters and interplay are here even in this very early appearance together. The premise was based on sketch by Stan's father and later remade in 1930 as Another Fine Mess. The opening scene, with the Boys evading recruiters looking for men to help fight the California wildfires, was reworked into the opening of Pack Up Your Troubles (1932).

Posted by Matt Barry at 9:04 AM No comments:

Oliver Hardy has been jilted by the girl he loves, so he decides to join the French Foreign Legion in order to forget her, and naturally drags Stan along with him. At four reels, this one occupies as a unique place between their usual short comedies and their feature-length movies. The extra running time allows for some expanded comedy scenes without dragging on or feeling padded out. Judging from the sets and number of extras, it appears to be a higher-budget production than their usual two-reel comedies of the period.

There's a fun running gag with the other Legionnaires all pining after the same photo of the woman (Jean Harlow) that Hardy is there to forget. Contains one of the Boys' best dialogue bits ("Hello, Mr. Levity?")

The basic plot would be remade by the team as The Flying Deuces in 1939, and the ending would be reworked for the finale of Bonnie Scotland (1935).

Posted by Matt Barry at 8:49 AM No comments:

A lumberjack knocks out a former boxing champ and is quickly promoted into the world of prizefighting. He attempts to distance himself from his reputation as "the most hated man in the ring", and sets himself up as a small town athletic trainer, but considers going in for a fixed fight to earn money to help his girlfriend.

This is another Poverty Row production from Victory Productions and starring Bruce Bennett (still billed as Herman Brix), similar to Amateur Crook which I'd watched recently. Good supporting cast in this one including J. Farrell MacDonald, Fuzzy Knight, and Guinn Williams.

I read that this was one of the first films licensed to television back in 1942, and I watched it on the Pub-D-Hub streaming service on Roku. Amazing to think of the long life films like this have had as reliable entertainment.

Posted by Matt Barry at 8:43 AM No comments:

This is an interesting little mystery-thriller "Quota Quickie" from England. A man finds a camera mysteriously deposited in the back seat of his car after a road trip, and processes the film in an effort to identify its owner. One of the photos appears to show a murder, and both the photo and the camera are quickly stolen. He uses the other photos to track down information and investigate the murder himself.

Stars Henry Kendall, who I'd seen in Hitchcock's Rich and Strange, with a very young Ida Lupino and John Mills in supporting roles. Edited by David Lean.

Posted by Matt Barry at 8:37 AM No comments: 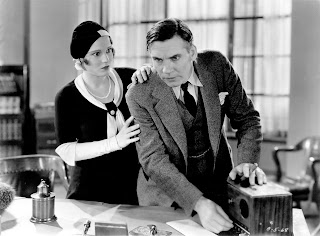 A young man is sent to jail after killing a man in a nightclub brawl. The DA (Walter Huston) who sent him away is the newly-appointed warden of the prison. The warden takes sympathy on the young man, who is given employment as the driver to the warden's daughter. His newfound position is threatened, however, when another inmate is murdered in retaliation for snitching, and the young man refuses to identify the killer.

Reminiscent of The Big House (1930) with its gritty, pre-Code depictions of prison life, and grappling with the social issues of the penal system.

Boris Karloff has a supporting role as one of the inmates. He commands attention in every scene in which he appears, and it's easy to see why director Howard Hawks thought of him for the role of a rival gangster in Scarface. Peter Bogdanovich used a clip from this film with Karloff in his directorial debut Targets (1968).

Posted by Matt Barry at 9:31 PM No comments: 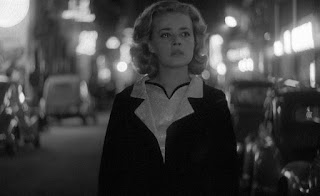 This atmospheric French Noir thriller tells the story of a killer thwarted by an ironic twist of fate.

Julien Tavernier (Maurice Ronet) conspires with his lover (Jeanne Moreau) to murder her wealthy husband. Tavernier pulls it off successfully, except he gets stuck in the elevator overnight on his way out of the building. Meanwhile, a young hood and his girlfriend steal Tavernier's car, and end up committing a murder of their own, which ends up getting pinned on Tavernier after eyewitnesses ID the car. When he finally gets out of the elevator, Tavernier is arrested for the murder he didn't commit, and in order to clear his name, has to confess to the one he did commit.

Posted by Matt Barry at 9:40 AM No comments: 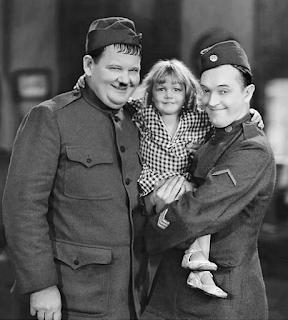 Laurel and Hardy's second feature is also one of their most shapeless comedies. The Boys are stationed at the front during WWI, where they promise their pal to look after his daughter if anything happens to him. After he's killed in action, the Boys go about trying to locate his estranged parents in New York City and reunite them with the little girl, encountering one mishap after another along the way.

There's more plot than usual here, but it's all so crammed into the 68 minute running time that the finished film feels more like a patchwork of sketches and scenes than a solid feature. Their first feature, Pardon Us, was similarly padded with extended scenes, but that one was at least held together by the prison setting. Here, the Boys go from the battlefields of WWI France to New York City and meet at least a dozen different characters who come and go from the story very quickly. It does allow room for appearances by some great character actors (and L&H regulars), including James Finlayson, Billy Gilbert, Grady Sutton, Charles Middleton, Tom Kennedy, the Boys' old nemesis Rychard Cramer (here playing an abusive stepfather in a genuinely menacing performance), and in a cameo appearance as the vengeful Army cook, director George Marshall. Child actress Jacqui Lyn turns in a delightful performance as the little girl, sharing a particularly funny scene with Laurel, who struggles to stay awake as she recounts the story of the Three Little Bears.

Some of the comedy highlights including an opening scene lifted from the team's 1927 two-reeler, Duck Soup, with the Boys attempting to evade a recruiting officer in the park; the Boys being assigned to KP duty and delivering the kitchen garbage to the dining room of General James Finlayson; interrupting a wedding and mistakenly claiming to have the groom's daughter; and an encounter with the mean orphan asylum agent ("How much would you charge me to haunt a house?" Hardy asks him).

Pack Up Your Troubles isn't one of Laurel and Hardy's strongest features, and the really good comedy scenes are just a bit too few and far between to sustain consistently through the hour-plus running time, but it's still a lot of fun, and is a nice showcase for many of the talented stock company that the team worked with throughout their time at Hal Roach Studios. 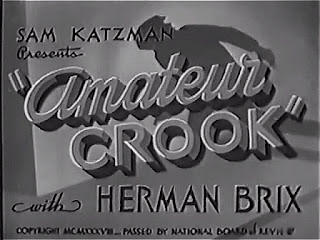 Bruce Bennett (still billed here as Herman Brix) stars in this mystery-caper about stolen diamonds. He plays an artist who finds himself wrapped up in a plot to retrieve the diamonds from a couple of crooks. He meets up with a young woman whose father left the diamonds with the two loan sharks, and sets out to get them back on his behalf. The two quickly find themselves at the center of an investigation for the missing diamonds.

The last 15 minutes or so takes a complete detour from the plot into some easygoing comedy before wrapping things up. It's a leisurely end to an otherwise tightly-plotted actioner.

Written by Basil Dickey, who had credits on many of the best serials of the era, including the three Flash Gordon serials, and directed by B movie stalwart Sam Katzman for the Poverty Row studio Victory Pictures.

Posted by Matt Barry at 7:32 AM No comments: 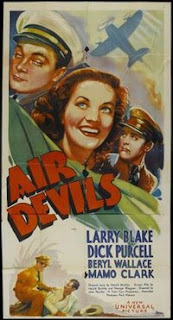 This is a solid B action film, from Universal Pictures, about two buddies (Larry Blake and Dick Purcell) in the constabulary on a South Seas island, their rivalry over a girl, and quashing a native rebellion. There is a great deal of action packed into its 60 minute running time, and Blake and Purcell have fun with their roles, engaging in friendly competition with a running joke that keeps seeing one of them lose his rank in the constabulary while the other is promoted, and vice versa.

The producer credit goes to Trem Carr, a king of low-budget productions who normally worked for Monogram, but this film was a production of Universal Pictures. It still has the look of one of Carr's Poverty Row productions.

The script is based on a story, "The Fighting Marines", by Harold Robert Buckley, a WWI flying ace and recipient of the Distinguished Service Cross, who wrote a number of stories based on his experiences in the US Army Air Service. I haven't seen any of the other films based on his stories, but according to IMDB he has writing credits for 13 films.

Posted by Matt Barry at 1:01 PM No comments: