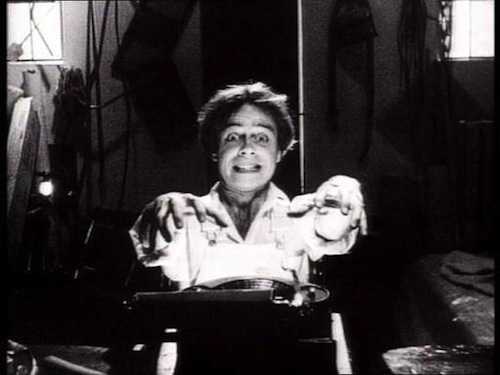 An aspiring screenwriter (co-writer/director Rufus B. Seder) arrives in Hollywood with his typewriter and sets out to write the script that will help him make it big in Tinseltown. He takes up residence in the Welcome Apartments, where he encounters an eccentric cast of characters that inspire the series of gruesome killings he writes in his script, but soon life begins to imitate art, and the writer finds himself at the center of a police investigation as the other tenants begin meeting the same grisly ends as the characters in his screenplay.

Filmed on sound stages in Boston, this is a remarkably evocative independent film that pays homage to the Hollywood B-movies and German Expressionist silent films that clearly served as its inspiration. Underground film legend George Kuchar plays the sleazy hotel manager, and it's great to see him in a starring role here.

This is a good behind-the-scenes documentary on the making of Screamplay. It's a model of what you can do with a lot of imagination on a small budget.

The low-rent, stylized B&W evocation of Hollywood reminded me of what Tim Burton did with a similar approach in Ed Wood, though of course he had far more of a budget to work with. Screamplay has a home-made quality to it that adds immeasurably to its atmosphere. 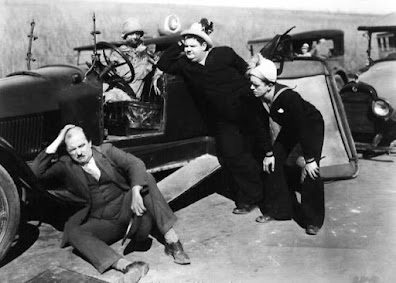 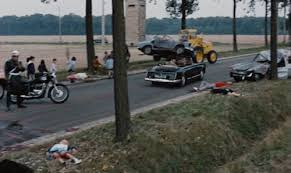 I watched a silent Laurel & Hardy comedy last night, Two Tars (1928), which finds the boys as sailors on shore leave who get involved in a nightmare of a traffic jam that turns into a violent battle between the frustrated motorists. I was particularly struck by the influence this film must have had on Jean-Luc Godard when he staged the similarly violent traffic jam in Weekend (1967).

Posted by Matt Barry at 9:12 PM No comments:

This is an amazing trick film made by Ferdinand Zecca in France in 1910. The premise involves a prisoner who is also a master escape artist and finds the most unusual ways of eluding his captors. One of the exuberant, gloriously free-spirited comedies produced by the Pathe Studio in the early years of the 20th century.

This is the kind of lurid Hollywood melodrama I love. It follows the torrid love affair between a Manhattan call girl (Elizabeth Taylor, in one of her finest performances), and a tormented businessman (Laurence Harvey).
There's an interesting subplot with Eddie Fisher as Taylor's long-time closest friend, and the film spends a good deal of time examining their relationship and the tension that it causes with Fisher's fiancee.
I'd been meaning to see this one for a while. I'd heard in an interview that George Kuchar cited it as a big influence on his own films, which made me even more curious to see it.
Posted by Matt Barry at 6:44 PM No comments:

This is a sequel to the short film I made this past spring, Scared 2 Death. Like many filmmakers, I found myself wanting to create something even though we were still in a strict lockdown period. As I've written elsewhere on this blog, I made a film back in January called Unknown Number, which had taken a great deal of preparation and a full day of shooting to pull off. While I was certainly happy with how it turned out, I also realized that the requirements of making a film even on that scale, with the limited resources I had, had sucked a lot of the joy out of the filmmaking process for me.

Several months later, I had the idea to make Scared 2 Death, a simple idea that I'd thought up about a decade ago while I was still living in Brooklyn. The situation is a horror film cliche -- the woman walking alone at night down a dark street, followed by an unseen menace. But the whole point of making the film for me was to take this situation and have fun with it. The fact that it was ultra-short and a very simple scenario to film made it all the more enjoyable to shoot.

Scared 2 Death is maybe my favorite of the movies I've made, because it got me back to the basics of what I love about making little films, and allowed me to re-connect with the joy I get just from filming a simple situation like that.

So, after a few more micro-shorts that I've made over the summer -- Isolation, Lights Out, and Scarcity -- I decided to have some fun by re-visiting the simple premise of Scared 2 Death with a tongue-in-cheek sequel, Scared 2 Death II: 2 Scared 2 Live. In this one, I take another staple of the horror film and just had fun with my own little interpretation of it.

This is another short film that I made under the lockdown restrictions, back in late June, called Lights Out. I premiered it on YouTube on June 26.
This one was born out of some of the darker ideas I wanted to explore about the idea of a character holed up in a single location during a catastrophe. I'd made a film along similar lines a few years, called Aftermath, so I was reluctant to tread too familiar territory. But I had the idea of a character alone in a house on the hottest night of the summer, when the power is suddenly knocked out during an electrical storm, and the dangers that await him in the dark.
I shot this one over the course of two nights -- a comparative luxury compared to the many one-day shoots I've done over the past several years. The Canon Powershot camera that I was shooting with handled the low-light situations very well, which made it possible for me to shoot in the darkness using only a flashlight as the lighting source. I liked the effect it produced, because it allowed me to highlight the little objects that are completely ordinary in the daylight, but at the same time take on menacing new implications in the dark.
This is also a good example of inspiration striking as a result of unexpected conditions. The lightning storm that I captured at the beginning of the film was not planned for -- but the storm came up the evening of the shoot and I knew it would be the perfect way to open the film.
I hope you enjoy Lights Out!
Posted by Matt Barry at 2:26 PM No comments: