I became interested in learning about screenwriter Mardik Martin when I first discovered the films of Martin Scorsese as a young film enthusiast. At that age, roughly 12 or 13, I focused on the names in the credits in order to study the individuals beyond the director who contributed to the film, and I saw his name pop up again and again, first on RAGING BULL, then MEAN STREETS, then THE LAST WALTZ, and NEW YORK, NEW YORK. Over the years, I was intrigued by this frequent collaborator who seemed to be involved in nearly all of Scorsese's early efforts, even going back to his NYU student films. I was surprised, then, that I could not find more information about him.

Recently, however, I learned of a documentary that had been produced several years ago about this enigmatic individual who had obviously made such a tremendous contribution to some of the most important films of the New Hollywood period, and then seemed to largely vanish from the Hollywood scene. Directed by Ramy Katrib and Evan York, MARDIK takes an affectionate look at its subject, telling the remarkable story of Martin's journey from Baghdad to New York at the age of 18, working his way through NYU's film school (after deciding to abandon economics, his original major of choice), meeting Scorsese (who, like Martin, felt like something of an outsider in his early days at NYU), his early film collaborations with the director made while they were both students -- and subsequently instructors -- at NYU, and their meteoric rise to the top of the American film industry during the 1970s. The documentary also deals with Martin's dark days in the early 1980s, marked by instability resulting from drug addiction and an inability to write the kind of scripts that Hollywood was looking for at that time. However, the story has a happy ending, as Martin returned to his love for teaching, this time at USC, where he continues to inspire a new generation of film students with his direct, honest teaching style, and tremendous insight in to the art of screenwriting. Martin was further recognized for his work when the WGA named RAGING BULL one of the 101 greatest screenplays in 2006.

The documentary, running a brisk 76 minutes, serves as a nice overview of Martin's life and work, though it moves a bit too quickly from one chapter of his career to the next, leaving certain questions and issues unexplored. For example, though it's obvious from their joint interview scenes that Scorsese and Martin are still very close and have a great deal of respect and affection for each other, it would have been interesting to hear why they have not collaborated on a project together since 1980's RAGING BULL. The film necessarily spends a good deal of time on Martin's collaborations with Scorsese, but solo projects such as REVENGE IS MY DESTINY and VALENTINO still get something of a short shrift.

There is also a disappointing lack of archival footage and stills, relying far too often on the kind of jokey animation segments that have become de rigeur in documentaries like this. I have no idea when (or why) this practice began, but it really is time for documentarians to retire this technique, as it only serves to distract and is a poor substitute for more thoughtfully-selected and carefully-researched visual source material. The directors include a moment in which Martin scolds them for shooting endless hours of footage without advance preparation in planning out the interview on paper, which presumably is intended to demonstrate Martin's own disciplined approach to crafting an interview script, but also perhaps reveals some of the shortcomings of the directors' approach to presenting the material, which overall feels rather shapeless and loose (though, somewhat confusingly, Martin is credited as the sole writer of the documentary).

Martin is such an engaging and entertaining speaker, however, that the film is at its best when it simply allows him a chance to share his story and his ideas in his own words, and it's good to see this master craftsman being given his due in the form of this documentary tribute.
Posted by Matt Barry at 12:02 PM No comments: 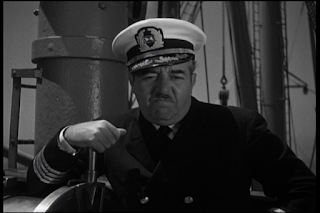 An offbeat comedy-drama with an all-star ensemble cast, set aboard a cruise ship on which various characters cross paths. There is the alcoholic writer (John Gilbert) who is on board to dry out and finish his novel. There are the private investigator (Victor McLaglen) and the crook he's pursuing (Fred Keating) who engage in a battle of wits over the stolen bonds and over the affections of the crook's partner-in-crime (Helen Vinson). There is the unhappy wife (Wynne Gibson) whose abusive husband (John Wray) hurts and humiliates her because of his embarrassment over her checkered past. Presiding over these and the various other passengers is the blustery, hot-tempered captain (Walter Connolly) who struggles to maintain control over his ship.

Notable mainly for its superb cast (which also finds room for such talents as Alison Skipworth, Leon Errol, Akim Tamiroff, and The Three Stooges), the film manages to be more than a just a curio, thanks to its intelligent script and to Lewis Milestone's direction, which contains some interesting camera choices that grant a strong degree of visual interest to the material. The interwoven threads of the various characters' stories are made all the more compelling through the deftly-handled shifts in tone between them, veering from moments of freewheeling comedy to sober drama. John Gilbert, in his final screen appearance, is especially poignant as the heavy-drinking author, considering the personal difficulties he was facing at this point in his career.
Posted by Matt Barry at 5:18 PM No comments: