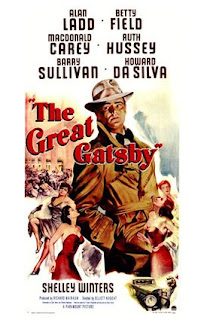 The second screen adaptation (after the tantalizingly lost 1926 silent version) of F. Scott Fitzgerald's celebrated novel, this 1949 version -- directed by Elliott Nugent -- is an offbeat film, with its '40s post-war sensibility striking an uneasy balance with the '20s Jazz Age setting. Fitzgerald's novel is re-worked here as a rise-and-fall narrative more typical of the '30s gangster film, combined with elements of post-war crime dramas. Gatsby is portrayed as a hardworking young man who develops a thirst for wealth and the power it brings. But his meteoric success is ultimately undone by his misguided devotion to the woman for whom he has carried a torch over the years. It's no wonder that this version is often talked about in terms of '40s film noir, both for its emphasis on Gatsby's tragic rise and fall, and for its often shadowy, high-contrast visual style.

Alan Ladd is an interesting choice for Gatsby. He is able to convey the naive, almost childlike qualities of the character, as well something darker, even somewhat sinister, under the surface. The casting of Ladd, a staple of Paramount's series of dark crime dramas of the decade (This Gun For Hire, The Glass Key, The Blue Dahlia), further places the film's interpretation of Gatsby within post-war noir's long line of tragic protagonists. One of the more frustrating results of this approach, however, is a reductive morality imposed on the story, which undermines some its power. Nowhere is this more glaringly obvious than in the frankly trite and unnecessary prologue, which has Nick Carraway and Jordan Baker (now married) visiting Gatsby's grave in the present day, and reflecting back on the tragic events that led to his downfall.

Paramount's 1949 version of The Great Gatsby ultimately, and perhaps inevitably, fails to convey the spirit of the Jazz Age zeitgeist that Fitzgerald captured so well in his novel, but it is, also inevitably, revealing as a glimpse of that era as viewed through the very different sensibilities of the time in which it was produced.
Posted by Matt Barry at 11:42 AM No comments: 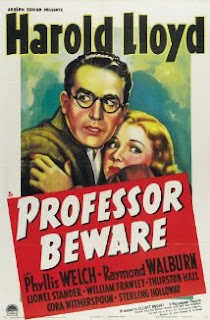 Of the major silent film comedians, Harold Lloyd's transition to sound was in some ways the most seamless. Whereas Chaplin continued making silents throughout the 1930s, and Keaton was assigned by MGM to a series of increasingly uncharacteristic (albeit financially successful) farce comedies, Lloyd took something of a middle-ground approach, gradually adapting his character and scripts to better suit changing tastes in screen humor, without sacrificing the best qualities of his silent work. This approach resulted in such superb films as The Cat's-Paw and The Milky Way, both of which demonstrated that Lloyd still had what it took to remain a top comedy star in the '30s.

Professor Beware was Lloyd's final independently-produced feature, and marked his retirement from film acting (with the exception of his return in Preston Sturges' nostalgic The Sin of Harold Diddlebock a decade later). Lloyd plays Dean Lambert, a timid Egyptologist who becomes convinced he is the victim of an ancient curse, and sets off on a cross-country chase from Los Angeles to New York in order to join an expedition departing to Egypt, where he hopes to find the missing tablet that will remove the curse.

This picaresque plot provides an excuse for lots of fun if loosely-connected sequences built around the professor's misadventures on his cross-country journey, peppered with a colorful cast of character actors such as Raymond Walburn, Lionel Stander, William Frawley, Thurston Hall, Cora Witherspoon, Sterling Holloway, and many other familiar faces. There is also a pleasant romantic plot involving Harold and a young heiress (Phyllis Welch) on the run that, as others have pointed out, bears more than a passing resemblance to It Happened One Night.

Often cited as a highlight of the film is the extended chase scene in which Lloyd and his traveling hobo companions (Raymond Walburn and Lionel Stander) have to keep running along the top of a moving train headed toward a low tunnel. Perhaps in 1938, when there was such a dearth of good visual comedy on the screen, this sequence would have seemed like a welcome throwback to the best of silent comedy, but seen today, it feels rather clumsy and is marred by the overuse of unconvincing back-projection.

Much more satisfying is the action-packed climax, in which a newly-invigorated Harold finds the courage to rescue the heiress from her father's yacht. The scene is like a throwback to the ending of his silent comedies such as For Heaven's Sake and Speedy. Harold rounds up a gang of various tough guys by taunting them and egging them on to give chase, which they do -- following him right on to the yacht and unwittingly acting as Harold's personal army as they engage in an all-out brawl with the yacht's crew. It's a well-timed and expertly-constructed sequence that demonstrates Lloyd's still-considerable skills for physical comedy even at this late point in his career.

Other highlights include a sequence with Harold hiding a stolen chicken under his coat and being forced to engage in some amateur ventriloquism to assuage the sheriff's suspicions, and a memorable sight gag of a frost-bitten Harold emerging from a refrigerated train car in which he has just spent the past several hours traveling across the state.

Overall, however, Professor Beware is far from Lloyd's best work. Too often the pacing lags between set-pieces, some scenes (particularly the clothes-changing sequence with William Frawley) go on too long, and Lloyd himself is just a bit long-in-the-tooth to be playing the overeager young professor getting worked up over superstitions around an ancient curse. But it's hard to dislike the pleasant, silly humor of it all, and there are still enough flashes of brilliance, particularly in the exciting climax, to make it a worthwhile and enjoyable effort from a master comedian.
Posted by Matt Barry at 1:09 PM No comments: