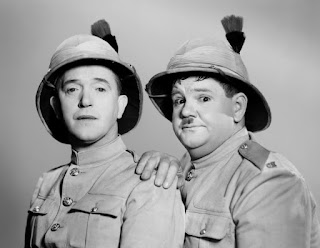 Laurel and Hardy come to Scotland to collect an inheritance and through a series of misunderstandings find themselves enlisted in the Scottish regiment of the British Army and sent off to India. This one contains at least three classic scenes: Hardy's sneezing fit at the bottom of a lake that leaves it completely dry, the Boys cooking a fish in their hotel room ("it shrizzled"), and their dancing to "The Hundred Pipers" while sweeping up trash, much to the ire of Sergeant James Finlayson.
Posted by Matt Barry at 8:54 PM No comments:

Last night, I saw that the newly-renovated and re-opened Parkway Film Center in Baltimore was going to be showing David Lynch's Eraserhead, a film I have never seen all the way through. I had previously begun watching it when it was available on Netflix or one of the various streaming platforms, but found that the small-screen format made it difficult to immerse myself in the alternate universe that Lynch creates.

Seeing it on the big screen, in a new 4K digital restoration, sounded more like the proper way to experience this film, which has such a devoted following that I have to confess I wondered if it would be able to live up the hype I've heard surrounding it for so long.

I arrived at the Parkway just in time for the 9:45 show on Saturday night, which these days is about as close to a "midnight movie" screening as you're going to find in the area. I purchased my ticket at the counter, and took my seat inside Theater 1, the largest of the three theaters at the Parkway. 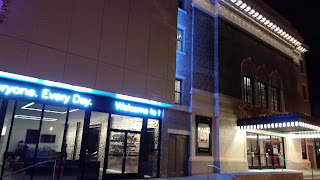 Finally seeing Eraserhead, I can understand its appeal to those looking for something different, for viewers interested in alternative possibilities for narrative cinema. Lynch creates a surreal hallucination following a night in the life of a young man who experiences a strange series of events after being left to tend after his newborn "baby", filled with nightmarish imagery, and a surprising number of moments of real humor. It fits well with the kind of uncanny cinematic universe that Lynch has created in other films, though it is perhaps less even, less consistent than his mature films. Here, the moments of self-conscious "strangeness" stand out a little too sharply. But Lynch still conjures up a real sense of dread and unease, masterfully demonstrating early on the hallmarks of his mature cinematic style.

I am glad that I finally saw Eraserhead, and under good conditions, because it really is a unique and highly original film that retains its power even after inspiring many imitations, and it's still exciting to see the movie that heralded David Lynch as a major new filmmaking force at the time of its release.
Posted by Matt Barry at 7:33 PM No comments: