Re-visiting the Astaire and Rogers Musicals

FLYING DOWN TO RIO (1933) -- Fred and Ginger have supporting roles in this South American-flavored love story. The leads are Gene Raymond and Dolores Del Rio, but it's Astaire & Rogers who made a big impression, especially with the extended "Carioca" number. It's an enjoyable romantic-musical comedy but mostly of note today for introducing Astaire and Rogers to the screen as a team.

THE GAY DIVORCEE (1934) -- One of the team's funniest pictures, especially the "Let's Knock Knees" number with Edward Everett Horton. Contains some of their best numbers, including "Night and Day" and "The Continental". I enjoyed this one primarily for the great comedy.

ROBERTA (1935) -- Coming after THE GAY DIVORCEE, this one feels like a step backward, putting Astaire and Rogers into supporting roles under stars Randolph Scott and Irene Dunne. But their scenes together are fun, as always, and the movie comes to life when they are on-screen. Unlike the later misfire CAREFREE, this one is just a rather dull film lacking the energy of the best Astaire & Rogers pictures. Musical highlights are "I Won't Dance" and "Smoke Gets in Your Eyes".

TOP HAT (1935) -- Perhaps Fred and Ginger's most elegant film. The plot is a solid farce of mistaken relationships, making it one of the team's most fun pictures as well, topped by a first-rate Irving Berlin score.

FOLLOW THE FLEET (1936) -- Possibly the lightest and most entertaining entry in the Astaire & Rogers cycle, with a nice ensemble cast (Fred and Ginger, along with Randolph Scott and Harriet Hilliard) who gel nicely together. The shipboard scenes are a lot of fun, and offer a nice backdrop for some dance numbers. The highlight for me is "Let's Face the Music and Dance", performed on a stunning Art Deco stage.

SWING TIME (1936) -- Some really beautiful numbers here that showcase the team here to their full potential. Astaire's "Bojangles of Harlem" number is particularly impressive for the synchronized dancing against the backdrop of dancing shadows, and the "A Fine Romance" number get my vote as the most beautiful that the team ever did, performed on a snowy soundstage -- Hollywood artifice at its most appealing. Often cited as the team's best film, but I found myself missing the colorful supporting cast of some of the other films who were always such a welcome presence.

SHALL WE DANCE (1937) -- Another one I enjoyed primarily for the comedy, another romantic farce with an amusing premise of a bit of gossip getting blown up into a full-fledged scandal. The syncopated shipboard machinery of the "Slap That Bass" number is great example of the really innovative numbers that I love about these films. Several great George & Ira Gershwin tunes appear here including "Let's Call the Whole Thing Off", "They Can't Take That Away From Me", and the title song.

CAREFREE (1938) -- The weakest of the team's vehicles. It has a strong feel of the "Screwball" comedy style about it, which makes for some fun, zany scenes, but it lacks the tender, subtle moments of their best films, and contains no especially memorable dance numbers.

THE STORY OF VERNON AND IRENE CASTLE (1939) -- This biopic of the husband-and-wife dance team is a sprawling but charming affair. Somewhat an atypical film in the Astaire and Rogers cycle, much more dramatic than usual for them, but still a fine showcase for their talents, and featuring a virtual songbook of late 19th- and early 20th-century tunes.

THE BARKLEYS OF BROADWAY (1949) -- Fred & Ginger's final film as a team, about a husband and wife musical comedy team whose relationship (both personal and professional) is threatened when the wife decides to pursue a dramatic acting career. An MGM production, it's bigger and more elaborate than their earlier RKO pictures, and their only film together to be shot in Technicolor, but Astaire and Rogers never get overwhelmed by the production value, and it's great to see them reprise "They Can't Take that Away From Me". A fitting capper to one of the finest pairings in all of cinema.
Posted by Matt Barry at 5:00 PM No comments:

Made a year before the classic Leslie Howard-Wendy Hiller version. The humor translates surprisingly well, although the dialogue necessarily loses some of its nuance when translated in subtitles. Interesting to see a different ending to the story rather than the one that Shaw wrote for the 1938 film.
Posted by Matt Barry at 8:32 AM No comments:

This fun British "Quota Quickie" is a comedy of manners set in an English manor home. When the lord of the manor is forced to move some of the workers in to his spare rooms, romance blooms between two of the young aristocrats and their new housemates.

Henry Wilcoxon -- a year before his breakout role in DeMille's CLEOPATRA -- has an early role here as the young working class man who falls in love with aristocrat Betty Stockfeld. Frederick Kerr, best remembered by movie buffs as Baron Frankenstein in the 1931 Universal horror classic, gives a fine comic starring turn in the title role, wonderfully paired with Kate Cutler as his wife. Also in the cast are Frank Bertram, Joan Marion, Deering Wells, and April Dawn. Written by John Hastings Turner.
Posted by Matt Barry at 8:14 PM No comments:

Looking for an early morning movie I came across this one on the Criterion Channel. Seemed like a good pick for an early Saturday morning...

Always enjoy these Anthony Mann noir/procedurals. This time Dennis O'Keefe is a treasury agent pursuing a group of counterfeiters. Worth watching for John Alton's incredible cinematography alone.
Posted by Matt Barry at 9:28 AM No comments: 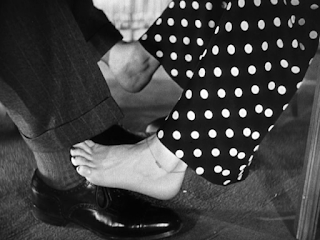 Watched this one last night and realized I hadn't seen it before. I guess it was one of those Hitchcock films I always intended to get around to but actually hadn't seen yet. He supposedly made it as a favor to Carole Lombard -- although further details indicate it was a project he personally initiated on his own -- but either way, Lombard is absolutely radiant in it, and her typically brilliant comedy timing and energy gels fine with Hitchcock's direction. This was just her second-to-last film before her untimely death.

In the DVD supplements, director Richard Franklin calls this Hitchcock's only "essentially American picture" -- which is true in the sense that he's working entirely within a distinctly Hollywood genre (Screwball comedy), and engaging in pure farce rather than his usual droll sense of humor.

Despite its title, this film bears no relation to the 2005 film with Brad Pitt and Angelina Jolie as a married couple who reveal that they are both assassins assigned to take the other one out. It's fun to imagine what Hitchcock could have done with that script...
Posted by Matt Barry at 9:27 AM No comments:

Gregory Peck stars in this Alfred Hitchcock thriller as the newly-arrived director of a mental institute, but it soon becomes clear to the head psychiatrist (Ingrid Bergman) that he isn't who he claims to be...

I can't honestly say it's one of my favorite of The Master's films, but it's definitely worth checking out for Hitchcock & suspense fans, especially for its justly-famous dream sequence designed by Salvador Dali, topped off with a lush score by Miklos Rozsa, gorgeous B&W cinematography from George Barnes, and a pair of great stars -- who never looked more glamorous than they did when working with Hitchcock -- at the top of their game.
Posted by Matt Barry at 4:07 PM No comments: