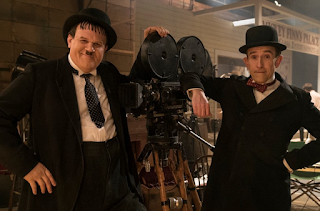 Saw the wonderful STAN AND OLLIE today. It really captures the warm spirit of their comedy through the fine performances of Steve Coogan and John C. Reilly.

I loved the re-creations of scenes from their films and music hall tours, which had me laughing harder than anything I've seen in theaters for a long time.

Some of the imposed dramatic conflict feels forced and a little too convenient, but this is a minor criticism.

The films of Laurel and Hardy mean more to me than any others, and I thoroughly enjoyed this loving and affectionate tribute to the team. It will bring up a lot of great memories for long-time Laurel and Hardy fans and hopefully help introduce some new viewers to their timeless comedy.
Posted by Matt Barry at 3:33 PM No comments: 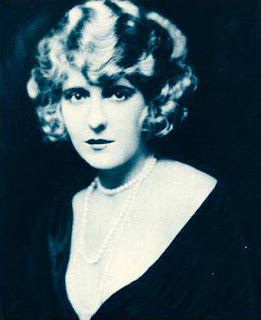 One of the first major stars of the American cinema when the film industry was still based on Fort Lee, NJ. She became an internationally-famous star in over 200 films and established her legacy as an American film pioneer and a true immortal of the silver screen, all without ever setting foot in Hollywood.

Following her successful screen career in America, White re-located to Paris, acting on stage & film and investing in resorts, casinos and real estate. After becoming involved with Greek businessman Theodore Cossika, the two moved to Cairo and spent much time traveling through Asia and the Middle East. Rumors of a screen comeback never materialized, likely due in part due to failing health, as she passed in 1938 at the age of 49.

Her starring role in the iconic Perils of Pauline and her status as one of the world's first internationally-famous movie stars cemented her legacy as one of the true immortals of the silver screen.
Posted by Matt Barry at 9:24 PM No comments: