Excellent Warners Pre-coder, with Edward G. Robinson in a fun send-up of his gangster characterization. He decides to cash in and get out of the bootlegging business when the repeal of Prohibition seems imminent, and heads from Chicago to California, where he intends to set himself up in high society. Robinson clearly has a lot of fun with the role, and is ably supported by Mary Astor, Helen Vinson, Russell Hopton, Louise Mackintosh, Berton Churchill, and Tammany Young. Roy Del Ruth's tight and vigorous direction keeps the pace fast and furious, and there is scarcely a wasted moment in its scant 75 minute running time.
Posted by Matt Barry at 5:18 PM No comments:

It finally occurred to me why I fail to respond positively to this film, and to Sturges' work in general: it's marked by a self-conscious cleverness that I find ultimately distracting. I'd been considering this idea for some time, but it really crystallized after viewing SULLIVAN on a double bill with Capra's ARSENIC AND OLD LACE, which -- I should point out -- I was also disappointed by but for different reasons, reasons that became apparent in comparing Capra's approach to Sturges'. However uneven ARSENIC might be in its tone, it certainly demonstrates a consistency of style in Capra's direction, which is typically effective.

With Sturges, I am always aware of his technique showing. In SULLIVAN I see this with erratic stylistic approach to the "dramatic" scenes, as if the director is proving his seriousness through self-consciously "artistic" (and disorienting) camera angles and filters -- as in the courtroom scene -- or the heavy-handed juxtaposition of the prisoners and the church congregation in a later scene, finally reaching a fever-pitch during the hallucinatory montage of laughing faces during the Disney cartoon.

It would be tempting to view these as temporary lapses in style due to the director working in unfamiliar territory, except that the same heaviness is apparent throughout even the comic scenes, which becomes even more apparent in comparison with the work of other filmmakers. Sturges' handling of dialogue, for example, strikes me as a case of a screenwriter in love with his own words, failing to achieve any particular sense of rhythm or poetry, as Lubitsch or Hawks say, were able to. Nor does his staging of physical comedy achieve the graceful, deceptive ease of McCarey or Capra, feeling rather too obviously constructed as opposed to rising organically out of the situations (see, for example, the rather forced way in which Sturges gets his characters to fall into a swimming pool).

The sharp, almost bipolar contrast in tone of SULLIVAN'S TRAVELS magnifies these issues, but I think they are apparent throughout Sturges' filmography. With Sturges, I am too often aware of the clever screenwriter "behind the curtain".
Posted by Matt Barry at 10:00 AM No comments:


An aggressively madcap, uneven comedy that oscillates wildly between screwball zaniness and tepid attempts at black humor. The premise involves a New York theater critic (overplayed by Cary Grant in manic, pop-eyed mode) whose honeymoon with his new bride is unexpectedly delayed when he learns that his two sweet, little old aunts just happen to be poisoning the lonely old men who pass through their Brooklyn boarding house while their crazy nephew (who thinks he's Teddy Roosevelt) buries the bodies in the cellar.

One would expect this premise to be ripe with darkly comic possibilities, but surprisingly little is actually made of it throughout the course of the film. Perhaps the idea of playing murder for comedy was considered just a little too dark for audiences of the time to really be able to explore the more gruesome elements for laughs, or perhaps something was simply lost in the translation from the Broadway stage to the screen, but the results feel decidedly underdeveloped and leave much comic potential untapped. Moreover, the farcical romantic plot with Grant and his new bride is oddly neglected, being relegated mainly to bookending scenes that seem almost wholly unrelated to the rest of the film in all but the most superficial ways.

Indeed, it is this superficial and arbitrary approach to the characters and situations that mars the film throughout, and prevents it from achieving any real sense of cohesion or totality. For example, Grant's occupation as theater critic only really serves to support a running gag about the neighborhood beat cop who wants to be a playwright. At the same time, inexplicably, Grant has also achieved notoriety by writing a series of books arguing against marriage, a fact that seems to exist solely as device to create tension with his new bride's clergyman father (which is never resolved nor even addressed again outside of the opening scenes).

To his credit, Capra keeps the pace moving (uneven as the material may be) and manages to keep the staging, confined largely to the single living room set, from feeling claustrophobic. The material also provides an interesting departure from the kinds of films Capra had become so strongly identified with by this point in his career. The result, however, is a badly missed opportunity.
Posted by Matt Barry at 10:43 PM No comments:

Ford's first feature-length talkie (after the now-lost short "Napoleon's Barber" [1928]) is a stagy, creaky war melodrama, set at the outbreak of WWI, about a colonel with the "Black Watch" regiment of the British Army who is sent on a secret mission to India to prevent an uprising. Only the scenes dealing with themes of military ritual and honor among McLaglen and his comrades bear Ford's distinctive touch; the rest is pretty silly stuff, not helped at all by the stilted dialogue, stiff and unnatural performances, and ponderous editing and camerawork (the lengthy talking scenes were reportedly directed by stage actor Lumsden Hare, who also appears in the film, which accounts for the stark shift in style). Ford quickly adapted to the sound film medium, and soon learned how to suit it to his style, but this early effort is of historical interest only as part of that transition.
Posted by Matt Barry at 11:15 PM No comments: 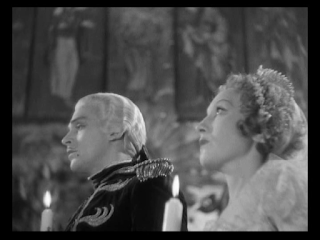 Korda-produced historical costumer about the rise to power of the Russian emperor Catherine. Typically fine costumes and sets, though Paul Czinner's direction lacks some of the spark and humor that Korda might have brought to the material and enlivened the scenes of romantic sparring between the leads, which otherwise feel rather dull and flat. Good performances by Elisabeth Bergner and Douglas Fairbanks Jr. as Catherine and the Grand Duke Peter, respectively, with Flora Robson in a standout role as the Empress Elisabeth.
Posted by Matt Barry at 9:41 PM No comments:

Over on YouTube, the Huntley Film Archives channel has posted a series of three videos, containing amateur film footage of the remains of film studios in Fort Lee, New Jersey, taken in 1935. The descriptions for the individual videos contain more information about each one. Though not credited, this appears to be the 16mm footage shot by filmmaker and historian Theodore Huff, who grew up near Fort Lee in the heyday of that town's time as the center of film production, and documented what remained of the studios in his 1935 film, GHOST TOWN: THE STORY OF FORT LEE (some of the footage was used later used in BEFORE HOLLYWOOD, THERE WAS FORT LEE, NEW JERSEY).

This fascinating footage is of great historical value, as it captures for posterity the remains of the studios which have now been entirely torn down (the last one standing, the Champion Studio, was demolished in 2013). There is something quite poignant about seeing the dilapidated remains of the studios in which the American film industry was born. These images come to us now like ghosts from the past.

I had been following the work of Anthony Powell since coming across his great videos of Antarctica (including, intriguingly, some that he made as part of the Antarctica 48 hour film festival) on his YouTube channel several years ago. Recently, I was delighted to learn that his feature-length documentary, Antarctica: A Year on Ice -- which I had read about with anticipation -- had been released and was available for viewing on Netflix.

It has been a long time since I've seen a film of such stunning visual beauty. Powell takes the approach of documenting the winter season in Antarctica, when a dedicated team comes together to work at the McMurdo Station. Once the last plane leaves for the season at the end of the summer, the team is committed to the six month duration of their stay, to work and help contribute to operations at the base. Interspersed between the interviews with different team members, which give us fascinating glimpses of how the individuals live and work and deal with the conditions, he presents breathtaking time-lapse views of the sky and snow, of the vast white landscapes that make up the continent. It is in these shots, capturing the power and beauty of nature, that the film is at its strongest.

Powell does a remarkable job capturing both the sweeping landscapes as well as the small details of life in Antarctica. His documentary is a valuable record of an experience that most people will never have for themselves, and presents both the challenges and highlights of what are clearly strenuous and extreme working conditions, and the personal friendships and rewards that come from the shared experience. Powell's photographic skill and eye for poetic images raise the film above the level of the kind of documentary you might see on a cable TV network -- Antarctica: A Year on Ice is a stunning and personal work of art.


Antarctica: A Year On Ice International Trailer from Anthony Powell on Vimeo.
Posted by Matt Barry at 5:39 PM No comments: