One of the true pioneers of the American film industry and the cinema's ultimate showman, Cecil B. DeMille helped put Hollywood on the map with THE SQUAW MAN (1914), pioneered the use of high-contrast lighting in THE CHEAT (1915), played a pivotal role in the founding of Paramount Pictures (and became the studio's first head of production), his THE KING OF KINGS (1927) had -- at one time -- been seen by more people than any other film, and his most famous film, THE TEN COMMANDMENTS (1956) is still run on American TV each year.

DeMille's critics have, at different times, held him up as an emblem of commercial Hollywood filmmaking at its most crass and overblown, whose films may be seen as tacky, vulgar, campy, old-fashioned, theatrical, and so on. And on a personal level he has been criticized for his rough treatment of actors, his right-wing politics during the McCarthy era, and his religious hypocrisy.

But whatever criticisms can be made against DeMille's films, it cannot be denied that he knew how to create great and memorable images.

I was recently going through the flood sequence of Michael Curtiz' DeMille-inspired NOAH'S ARK (1928), trying to find an image I could freeze frame and pull to illustrate my write-up of that movie. As I went through each shot, I could not find a single one that could stand on its own as a great image. Added up, sure, the sequence is impressive enough, but when you begin to look at how it's put together, it becomes clear that Curtiz was throwing a lot of coverage shots together hoping they'd stick. Curtiz could imitate but it never feels like the real thing, never adds up to anything other than an imitation. 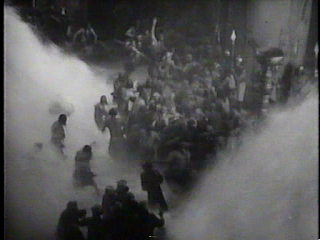 DeMille, on the other hand, had a clear vision and purpose for every image that he put into his films. When you look at a sequence like the parting of the Red Sea in THE TEN COMMANDMENTS, you can find numerous images that work on their own, which also add up to create a cohesive and spectacular whole. Many of the criticisms of his work remain perfectly valid, but running throughout that work is a cohesive artistic vision that was all DeMille's own. 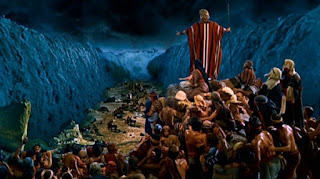 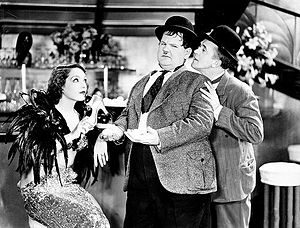 This chaotic mess of a film took over a year to complete, with eight directors (including Richard Boleslawki, Allan Dwan, Edmund Goulding, Russell Mack, Chuck Reisner, Roy Rowland, Sam Wood, and George Stevens) taking turns at the helm. Jimmy Durante plays as a Tarzan-like jungle movie star who throws a big party in order to convince Baron Munchausen (Jack Pearl) to let him use his real lions in his next picture and add some real thrills to it for a change. Polly Moran, Charles Butterworth, Eddie Quillan and June Clyde are among the cast who appear in the various scattered threads of the plot, which is peppered with cameos by Robert Young, The Three Stooges, and even Mickey Mouse, in an animated sequence provided by Walt Disney. Incredibly, the whole thing was shot by the great James Wong Howe, whose talents were certainly wasted here.

Laurel and Hardy steal the picture when they show up toward the end to deliver the lions, and quickly become engaged in an egg-breaking battle of tit-for-tat with Lupe Velez. This sequence, the highlight of the film, was directed by their old cameraman George Stevens, whose masterful handling of comedy is evident in giving Velez and The Boys room to perform the routine without any unnecessary intrusions. It says so much about Laurel and Hardy's incredible gifts for comedy that they could do more with a little scene like this than MGM could with all of its mighty resources poured into the film.
Posted by Matt Barry at 10:40 PM No comments: