Book Review: Fritz Lang - The Nature of the Beast 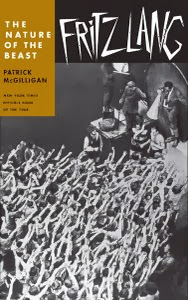 Fritz Lang: The Nature of the Beast
by Patrick McGilligan
University of Minnesota Press


Fritz Lang produced one of the most-studied and celebrated bodies of work of any filmmaker, and yet he remains a largely enigmatic figure. After a highly successful career as one of the leading directors in Germany during the silent era, Lang eventually emigrated to the United States, where he directed numerous films in Hollywood and became one of the most internationally-recognized filmmakers in the business. Yet his personal life has remained largely shrouded in the mythology, often spread by Lang himself, that built up over his long career.

Patrick McGilligan’s Fritz Lang: The Nature of the Beast (originally published by St. Martin's Griffin Press in 1997, and now available from the University of Minnesota Press) undertakes documenting Fritz Lang's life and work beyond the publicity and personal mythology. It is an exhaustively-researched, meticulously-detailed work. McGilligan gives us a comprehensive biography, covering each period of Lang’s life and work in extensive detail, and masterfully interweaving his research with quotes from those who knew and worked with Lang, to give us a stronger sense of how the filmmaker's life shaped his work.

Beginning with the director's early years in Vienna and Paris, McGilligan does an excellent job in shedding light on Lang’s formative experiences, including accounts of his military career as well as his training in the arts. Lang’s entry into motion pictures in Berlin, initially as a scenarist before turning to directing, is well-covered, with welcome descriptions of his earliest works that are now lost, and details about the two producers who did more than anyone else to facilitate Lang’s early film career – Erich Pommer and Joe May.

McGilligan spends a good deal of time in The Nature of the Beast exploring the mythology surrounding the director, particularly in two key incidents that have remained clouded by conflicting accounts of the events. The first involves the death of Lang's first wife Lisa Rosenthal, the cause of which was never fully determined. While it was ruled a suicide, following her discovery of Lang’s affair with screenwriter Thea von Harbou (whom Lang later married), there persisted suggestions that Lang had played a role in her death. Interrogated by the police on the night of Rosenthal's death, Lang and von Harbou insisted it had been a suicide. It is here that McGilligan makes some of his more controversial connections of this incident with Lang's filmography, citing the recurring suicides and slayings in the films - from Brunhild's suicide in Die Nibelungen all the way through the burlesque dancer's murder in his final American film, Beyond a Reasonable Doubt - to suggest that, even though these kinds of plot devices had been present in Lang's work almost since the beginning, they took on a much greater deal of significance after the death of Lisa Rosenthal.

The second incident occurs in 1933. Lang claimed that he had been summoned by Joseph Goebbels for a meeting, in which Goebbels offered him a position as head of the German film industry. According to Lang's account, he quickly fled the country, although there are conflicting accounts of the story and doubts expressed over certain details by numerous sources. What is certain is that during this time his marriage to Thea von Harbou dissolved. With her allegiance to the Nazis, and Lang's own Jewish ancestry, the marriage came to an end in 1933 as Lang prepared to leave Germany.

These events lead in to Lang's departure from Germany, to his brief stay in Paris, and to his eventual arrival in Hollywood. McGilligan gives us a revealing portrait of Lang's struggle to fit in with the structured and producer-centered model of the Hollywood studio system. He developed several ideas for projects before directing his first American film, Fury, for MGM in 1936, and quickly ran in to opposition for some of his more controversial ideas for the script. Lang also struggled to fit in with the colony of other Jewish actors and artists who had fled Germany following the rise of Nazism. Lang's relative comfort stemming from his prestigious reputation in the German cinema, as well as rumors about the death of his first wife and conflicting stories of his meeting with Goebbels, did nothing to endear him to his fellow expatriates.

McGilligan covers Lang's years in Hollywood through accounts of his professional struggles within the studio hierarchy, and providing solid accounts of the often complex production histories of Lang's films from this period. He paints a portrait of a singular artist who never quite adapted to the studio system, as evidenced by the recollections of Lang's collaborators during this time. One of the critical moments in Lang's later career came during the height of the Blacklist in the early 1950s, when he was forced to distance himself from his left-leaning political positions in a similar way that he'd had to distance himself from his associations with Nazism after leaving Germany, another struggle against changing political tides.

Such incidents are consistent with McGilligan's portrait of Lang as an outsider, someone eternally in the process of adapting to his environment and re-writing his own personal history in order to do so. McGilligan's accounts of pivotal moments in Lang's life reflect the approach he has taken with his book, exploring the facts beyond the personal and professional stories that have built up over the years (and have taken on seemingly mythic proportions) to get at a better understanding of the man behind the mythology. Whether or not the reader agrees with the conclusions that McGilligan draws, the book is a meticulous work of research that does an admirable job in presenting the biography of its highly complex and often contradictory subject.
Posted by Anonymous at 6:35 PM