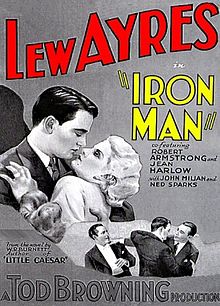 Tod Browning is so closely associated today with the macabre and often gruesome thrillers for which he achieved his greatest fame (Dracula, Freaks, The Unknown) that it is easy to forget that he worked in a number of different genres. One example is Iron Man (1931), a pre-Code boxing melodrama that was one of three films he made for Universal in the early '30s, sandwiched in between his loose 1930 remake of his 1921 crime drama Outside the Law, and his iconic horror film Dracula.

Iron Man stars Lew Ayres (one year after his star-making performance in All Quiet on the Western Front) as a young prizefighter who bounces back after losing his first fight, but once he achieves some success, his gold-digging wife (Jean Harlow) re-appears in his life, and after convincing him to dump his long-time manager (Robert Armstrong), the boxer's career begins to fall apart.

Browning had a knack for this kind of hard-hitting, gritty, urban material, as evidenced here and in Fast Workers (1933), which makes one curious to see what he would have done had he been able to explore it more frequently in the pre-Code sound film period.
Posted by Matt Barry at 9:00 AM