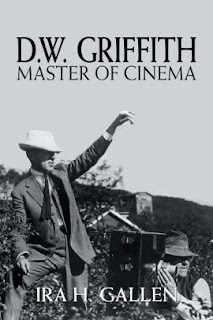 Ira Gallen's study of the early career of D.W. Griffith is one of the finest books on the subject of film published in recent years, and certainly one of the most thorough published about the complex, often contradictory, still controversial man who did more than any other figure to advance the art of film in the medium's formative years.

Gallen, a film & TV historian, collector, and archivist, has done tremendous work in recent years in championing Griffith's legacy, between authoring this book, and editing Seymour Stern's writing on Griffith's still-extremely controversial masterwork, The Birth of a Nation, which must certainly rank as one of the most important contributions to silent film scholarship. (He also has posted a number of videos of Griffith's Biograph shorts on his YouTube channel, contributing a valuable online archive of Griffith's early films.)

D.W. Griffith: Master of Cinema is focused on Griffith's early life and his career in film up through his final year at Biograph. By concentrating his study on this, the most fertile period of Griffith's career, Gallen provides a comprehensive overview of the innovations that the director was making in leaps and bounds during those years. This study, which contains analyses and production histories of key Biograph short subjects, clearly establishes Griffith's contributions to the development of film grammar, without either the hyperbolic and exaggerated claims that have been made in Griffith's favor in the past, or the tendency in recent years to downplay Griffith's contributions in favor of shining a (deserved) light on the achievements of other directors of the period.

The final sections of the book contain details about Griffith's producing arrangement with the Aitken brothers, which resulted in The Birth of a Nation, and a scrapbook of photos from the Biograph company. Gallen also includes commentary on Griffith's legacy from leading film historians such as Kevin Brownlow and Arthur Lennig, and addresses the cowardly and shameful removal of Griffith's name from the DGA's career achievement award in 1999, solely on the basis of the racism of The Birth of a Nation. Sadly, such an act seems somehow appropriate given the film industry's shabby treatment of Griffith during much of his own lifetime as well.

D.W. Griffith: Master of Cinema is a first-rate piece of film scholarship that does justice to the complexity and importance of its subject, and Gallen is to be commended for his in-depth study of this master filmmaker's formative years, which are really the formative years of the art of cinema.

Buy the book at Barnes and Noble: https://www.barnesandnoble.com/w/dw-griffith-ira-h-gallen/1123134988