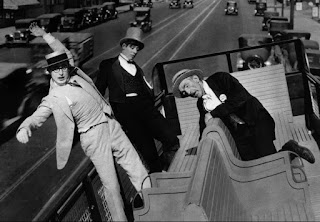 One of Harold Lloyd's more lightweight features (running just under an hour), but also one of his funniest. Lloyd plays a wealthy idler who inadvertently helps a minister save his struggling mission, and quickly becomes invested in his newfound philanthropic venture after falling in love with the minister's daughter.

Though there are plenty of good gags throughout, this plot serves largely as a setup to the impressive chase sequence that occupies nearly the final third of the film. Filled with breakneck stunts, expertly-staged car chases, and enough gags for two or three movies, it's easily one of Lloyd's best set pieces.

In addition to the brilliance of the comedy, one also has to appreciate the brilliance of the filmmaking, especially Walter Lundin's shimmering cinematography. Directed by Sam Taylor. Written by John Grey, Ted Wilde, Clyde Bruckman, and Ralph Spence (titles). With Jobyna Ralston, Noah Young, Paul Weigel, James Mason.
Posted by Matt Barry at 1:41 AM