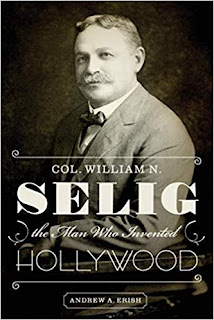 Too many film histories relegate the name of William Selig to a mere footnote, if he is mentioned at all. If one thing is clear, it's that the more you study film history, the more you realize there is yet to be explored.

Andrew Erish's book is an impressively-researched work that fills in many gaps in the traditional histories of the early film business, and in doing so, serves nearly as much as a history of the fledgling American film industry as it does as a biography of a major film pioneer. Selig was responsible for a number of important steps in the transition of filmmaking into a full-fledged industry. He was making films almost from the very beginning, in 1896. Originally based in Chicago, the filmmaking activities of his Selig Polyscope Company eventually expanded to Los Angeles, where he established Southern California's first permanent film studio in 1909, as well as his famous Selig Zoo. Selig also pioneered popular film genres and forms (particularly the serial) and helped establish such stars as Tom Mix and Fatty Arbuckle.

Unfortunately, most of Selig's films are lost, making re-evaluation of his work difficult, and unfairly consigning his name to relative obscurity -- not helped by the fact that he is also somewhat awkwardly positioned between the earliest inventors of cinema (Edison, Lumiere) and the next generation of moguls who often receive credit for many of Selig's contributions to the cinema.

This book is a major work that provides a much-needed re-evaluation of those contributions made by Selig, as well as painting a more complete picture of the development of the American film industry.
Posted by Matt Barry at 7:12 PM

Thanks Matt
This remarkable man is my great grandfather’s brother. He had no children to stick up for him while others gladly took credit for his accomplishments.
My father was the lone Selig from the family line and a doted on only child who practiced and taught us that ringing ones own bell was not the way to go and made sure he didn’t dote on my brother and 3 sisters. But as removed as he was he was there for you and was an excellent father.

As a child we saw the magazine and newspaper articles but the Colonels biggest fan, my grandfather died when we were small children.

Then came the book