"Oscar Micheaux: The Great and Only" by Patrick McGilligan 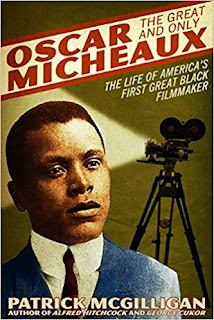 I recently finished reading "Oscar Micheaux: The Great and Only" by Patrick McGilligan, a thoroughly-researched biography of the pioneering independent African-American filmmaker that provides a rich account of his fascinating life and his many films, relatively few of which survive. The details of Micheaux's production and distribution strategies provide great insight in to the nature of "race" film and independent film models as they existed in the 1920s-40s. Perhaps the most interesting portions of the book, however, are those sections dealing with Micheaux's early years as a homesteader in South Dakota and his early work as a novelist, which paved the way for the subjects he would return to again and again in his films.

McGilligan also provides whatever details still survive about some phantom Micheaux films -- projects that were referred to in the press but are not known to survive or were even to have been produced or completed at all. Among the most intriguing of the lost Micheaux films are his first, THE HOMESTEADER (1918), based on his first novel, and his final film, THE BETRAYAL (1948), which ran over three hours and from the description sounds like a fascinating capstone to Micheaux's long career that brought together many of his favorite themes.

McGilligan paints a rich portrait of one of the most significant, but also enigmatic, figures in film history. The book is a much-needed examination of Micheaux's life and career. Through it all, Micheaux emerges as a larger-and-than life figure who tirelessly pursued and realized his artistic ambitions against significant challenges.
Posted by Matt Barry at 10:58 PM