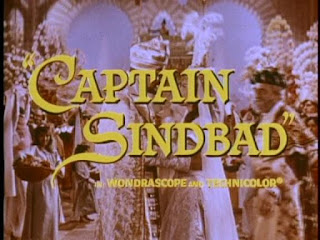 It's funny, I'm not sure just why this should be the case, but recently I've found myself drawn back to a genre of film that I haven't really watched that much since I was a kid -- fantasy and monster movies. I don't know if it's just a general affection or nostalgia for many of these films that's coming back to me or what, but I've had more of a desire to see these again after a long time.

I came across one called Captain Sindbad, from 1963. Guy Williams from Disney's Zorro stars, and it's directed by Byron Haskin. I have vague memories of watching this one on TV with my grandfather. It was on one of the cable TV stations, TNT, I believe -- it must have been around 1992 or 93. This isn't even one of the better examples of the genre -- not in the same league as the Ray Harryhausen movies, but still plenty of color, lavish sets, and fun special effects. I just remember loving those kinds of fantasy films so much then that I'd enjoy any of them I could find.

Watching these again, I think I may have grossly underestimated how influential they were on my dream of making movies of my own.
Posted by Matt Barry at 12:55 PM