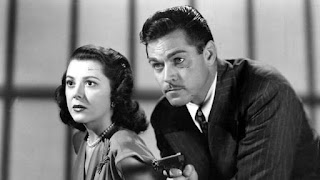 A remake of Tod Browning's Outside the Law, which he'd filmed in 1920 and 1930. This version, based on Browning and Garrett Fort's original story, was produced by Universal in 1946, directed by Jean Yarbrough. A reformed ex-convict, working in a big department store around the holidays, is confronted by a gangster who knows his past about pulling off an inside job. The ex-con and his wife decide to pull off the job on their own and start a new life, but the gangster gets wise to their double-cross.

This version suffers from the same problem as the 1930 version -- it turns deadly dull when the couple is holed up in their apartment hiding from the cops for most of the second half of the film. It also lacks the star presence of the previous versions (Lon Chaney in the original, Edward G. Robinson in the first remake), although Preston Foster delivers a solid performance as gangster Bart Madden, and Ann Rutherford and Alan Curtis are sympathetic as the romantic leads.

Although he'd filmed the story twice before, it would be interesting to see what Browning would have done with the material in the post-war era of this version.