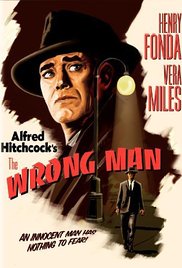 In Alfred Hitchcock's body of work, his films tend to be thought of in four or five major "sections": his early British period, including his silent films; his "Golden Hollywood" period of the early- to mid-40s; his "post-war" period, beginning with "Spellbound" at Selznick, covering all of his independently produced films, and ending with the dark, profound "I Confess"; his "golden age" of "Rear Window" through "Pyscho" and "The Birds"; and finally, his "later years", featuring such films as "Topaz" and "Frenzy".

One film that somewhat stands out among his films of his "golden age" of the 50s is this 1957 drama based on a real incident of a man falsely identified as a stick-up man, and his efforts to extricate himself from inevitable conviction at the hands of mistaken witnesses.

What makes the film unique is that, by 1957, Hitchcock had become very comfortable working within his style, so much so that by 1959 he was able to make what essentially amounted to self-parody in "North by Northwest". His TV show had been on the air for two years by this time, and it must have seemed to everyone that the Hitchcock formula was already well set.

It came as a surprise, then, when Hitchcock made a stark, black and white film that owes much to Italian NeoRealism as well as the films of Jules Dassin, Sam Fuller, and other younger filmmakers who had emerged after the war. Hitchcock chose as his leading man Henry Fonda. Unlike his two other favorite leading men, Cary Grant and James Stewart, Fonda was quite capable of stepping outside of a "public image" and getting closer to the root of the character he was playing. Here, he is the model of solemn, silent dignity as he is put through every conceivable indignity while being questioned and investigated by the police.

The film makes brilliant use of its New York City location photography. There are some scenes taken in the subway that are particularly effective. Hitchcock had used New York as a location before, and would use it again, but never with quite the same "realist" style as he does here.

"The Wrong Man" is the odd Hitchcock film that can't quite be compared to any of his other work. Aside from the theme of the film, which of course defines Hitchcock's favorite plot device, there is little in the film that screams "Hitchcock". There is, as in many films of the era, an interesting exposing of the "dark side" of American family life. It's apparent that, especially for many artists, post-war American life was portrayed as just a little too good, just a little too perfect, and filmmakers like Hitchcock, Lang, Wilder, and others delighted in poking holes in that mythology.

The film is an interesting testament to the willingness of Hitchcock to step outside his cinematic "comfort zone" and experiment with new, emerging film styles in cinematography, acting and storytelling. As has been pointed out, the public stayed away from the picture, probably because Hitchcock's name guaranteed light, fun entertainment. Some have even suggested that the film would have been more highly regarded if directed by someone like a Frankenheimer or a Lumet. I would tend to agree with Andrew Sarris' assessment of the film as one of the greatest American films of the 1950s.
Posted by Anonymous at 10:10 AM