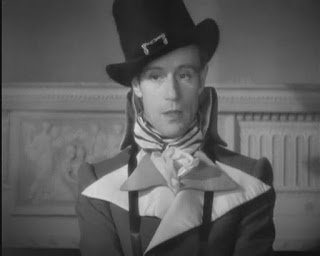 Exciting period drama -- adapted from the novel by the Baroness Orczy with a smart script by Lajos Biro, S.N. Behrman, Robert E. Sherwood and Arthur Wimperis -- about a mysterious avenger, known only as the Scarlet Pimpernel, who saves French aristocrats from the guillotine during the Reign of Terror. One of the better films produced by Alexander Korda in Britain during the '30s, this story of intrigue and espionage during the French Revolution manages to combine a colorful historical flavor with the same kind of bawdy humor that made Korda's earlier THE PRIVATE LIFE OF HENRY VIII so enjoyable.

Leslie Howard is well-cast in the title role, transitioning effectively between his quite funny portrayal of the effete, foppish idler Sir Percy Blakeney, and his alter ego, the heroic and noble Pimpernel. Merle Oberon delivers a fine and touching performance as Blakeney's wife, who - unaware of her husband's heroic deeds - sees only his increasingly foppish pose and finds herself falling out of love with him as a result.

Raymond Massey is an excellent heavy as the dastardly Chauvelin. His understated performance is filled with enough real menace to make him a formidable opponent for the Pimpernel, while still maintaining a sinister charm when matching wits with the foppish Blakeney. The rest of the supporting cast is uniformly excellent, especially the always-delightful Nigel Bruce, who provides comic relief as the bumbling Prince of Wales.

Harold Young's direction is perfectly effective, but the necessity of covering a lot of plot in the film's 90 minute running time leaves little room for any deviation from the central plot points. Harold Rosson's black and white cinematography is often drab and devoid of any stylistic flourishes, showing no hint of the consummate artistry demonstrated in his prolific work for MGM during this period on some of that studio's top productions. The production values overall feel rather spare, with even Vincent Korda's period settings appearing rather flat and uninspired.

Still, there's much fun to be had here, especially for fans of historical intrigue, and it strongly benefits from its excellent performances and intelligent screenplay.
Posted by Anonymous at 10:38 PM