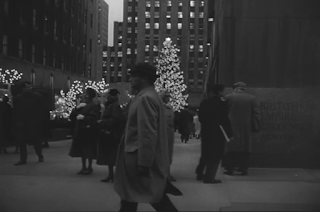 Now this is an unconventional Christmas movie!

This low-budget noir stars Allen Baron (who also wrote and directed) as a small-time Cleveland hit man who comes to New York around Christmastime to bump off a mobster, but gets in over his head when he lets slip that he wants this to be his last job. Much of the film consists of shots of the hit man walking the streets of New York, alone with his thoughts (narrated by Lionel Stander). It is ultimately a tragic tale, though never one tainted by cheap sentiment or unearned, misguided calls for sympathy. It is hard-edged, brutal, and terrifyingly honest in many ways.

The locations of NYC play such an integral part in the film, heightening the hit man's sense of loneliness and alienation amid the crowds. Without exaggeration, the location photography here is some of the finest, and certainly most effective, that I have yet seen. A climactic sequence taking place in the Meadowlands of New Jersey is particularly striking for its stark, bleak imagery (clearly filmed during a brutal windstorm) as a backdrop in which the violent final shoot-out takes place. The haunting, lyrical shots of raindrops falling in the water, the reeds blowing in the wind, and the contrast between the marshes and the busy highway visible in the background, achieve a real poetry.

I really have no idea how I never saw this one before, but it's certainly one of those movies that I instantly connected with after just one viewing. This is a special film, to be sure.
Posted by Matt Barry at 10:27 AM