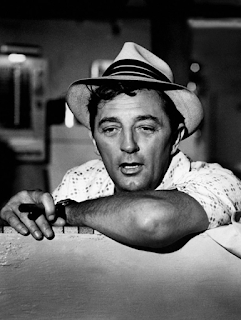 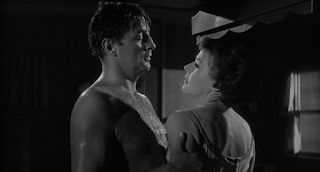 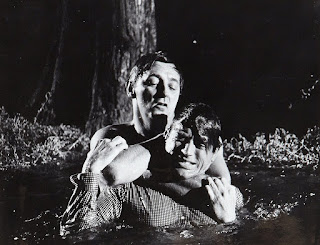 Watching CAPE FEAR again last night for the first time in years, I was struck by the highly effective sense of dreamlike frustration in the climactic sequence on board the houseboat, with Peck's helpless frustration as he watches the boat get cut loose and float away, frantically swimming after it, and then learning that it was all a distraction while Mitchum has already made his way back to shore to attack Peck's teenage daughter.

I couldn't help comparing Mitchum's terrifying performance here with his characterization in NIGHT OF THE HUNTER. The difference is that CAPE FEAR takes a realistic approach, firmly rooted in the conventions of its genre and in the classical style, where NIGHT OF THE HUNTER is like a dream and stands own its own as something totally unique.

I've become fascinated by Mitchum recently -- an absolutely fearless actor with a seemingly intuitive sense of how to play each role he undertook...versatile doesn't begin to describe his range.
Posted by Matt Barry at 3:05 PM