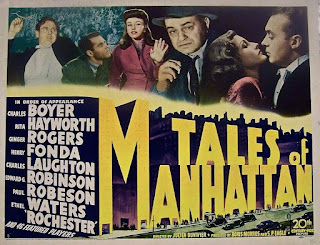 I watched this film the other night. It's one of those omnibus films like IF I HAD A MILLION or O. HENRY'S FULL HOUSE -- with five stories involving a cursed tailcoat as it is transferred from one owner to the next and changes their fortunes in the process -- except this one is the work of a single director, Julien Duvivier, which accounts for the stylistic consistency between the individual segments here when compared with other films of this kind.

The five segments are all interesting if rather offbeat stories acted by major stars including Charles Boyer, Rita Hayworth, Henry Fonda, Ginger Rogers, Charles Laughton, Edward G. Robinson, Paul Robeson and Ethel Waters, among many others. (the copy I saw is missing the W.C. Fields sequence that was restored in the '90s, which is often cited as a highlight and which I've seen elsewhere, but is far from being among The Great Man's best work).

It's too bad Hollywood doesn't make films like this anymore, outside of the odd example such as 1989's NEW YORK STORIES or 2008's NEW YORK, I LOVE YOU. The format offers a lot of potential to tell short stories and the best of them can operate like variations on a theme.

A side note, but there's a particular little moment in this film that I loved: Eugene Pallette delivers the tailcoat to Henry Fonda's manservant Roland Young, who is cleaning up balloons and other debris after a wild party the night before. Young lets go of the balloons, which float up to the ceiling. A moment later, one balloon bursts off-screen, presumably from coming into contact with the hot klieg lights at the top of the set, and the men react to it briefly, while continuing on with their dialogue. Likely it was all done in a single take and was left in. It's the kind of little moment that reminds you you're watching a movie, and it calls attention to the all the hardware just out of camera range above the actors on the soundstage.
Posted by Matt Barry at 3:00 AM