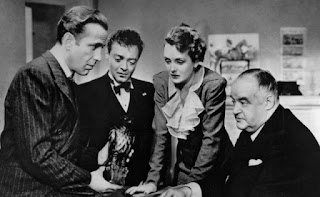 Great big-screen showing of THE MALTESE FALCON at the Charles tonight. The model of Classical Hollywood economic storytelling. It's a film that cries out to be seen on the big screen -- you become aware of the subtle but masterful technique Huston uses to keep things visually interesting even through pages of dialogue. Great performances all around -- everyone makes an impression and makes the most of their roles, especially Greenstreet, who comes in somewhat late in the picture but commands attention in every scene in which he appears. It's a watershed Hollywood film in some ways -- helping to usher in the era of the writer-director in the early '40s, and pushing the hardboiled detective genre film into new territory, with Spade's torn conscience about turning in the woman he has fallen for while remaining bound by honor and duty to his partner whom she killed. Spade's sarcastic kidding about Brigid O'Shaughnessy's compulsive lying masks an uncertainty and even insecurity about his feelings for her and whether she can be trusted, whether she will ultimately hurt him. His shield of cynicism toward her at the end betrays his vulnerability. A brilliant and even beautiful film...mysterious, evocative...the stuff that dreams are made of.
Posted by Matt Barry at 10:34 PM