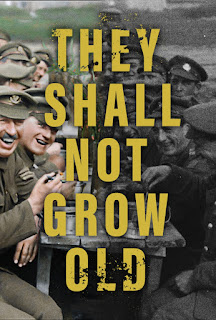 I managed to find a theater yesterday that still had available seats for Peter Jackson's WWI documentary THEY SHALL NOT GROW OLD. It was being presented as a special event, in select cinemas with a limited number of showtimes, and every theater I checked was sold out. I finally managed to find one, over an hour away, that had seats available. I'm glad I made the effort, because THEY SHALL NOT GROW OLD is possibly the best film I've seen this year...certainly the most powerful.

The story behind this is that the Imperial War Museum commissioned Jackson (who is a huge WWI history buff) to make a documentary culled from their more than 100 hours of archival footage and 600 hours of interviews with British veterans.

They give him carte blanche to use whatever he wanted, however he wanted, and to tell whatever story about the war he wanted. Their only stipulation was that he had to use the footage in some unique or original way.

His solution was to use the footage as the starting off point to create a totally immersive experience that would put the viewer straight into history. He used state-of-the-art technology to stabilize, restore, and even colorize the footage, and added sound made up of new recordings of authentic artillery (again, culled from his personal collection of vintage WWI artillery) and hiring lip readers to translate visible on-screen speaking, which was then dubbed by English actors in the correct regional accents based on where the regiment hailed from.

Aside from the occasional dubbing, he made the decision not to use any narrator or historian voice over, and instead to use only the interview audio of actual veterans.

What an amazing film, capturing the experiences of WWI and told by the men who lived them. What Jackson does with the archival materials immerses you right into history.