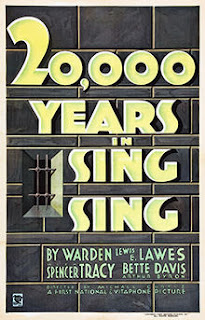 In the early ‘30s, the Warner Bros. studio was establishing itself as Hollywood’s premier place for hard-edged, social realist dramas that reflected the conditions and attitudes of Depression-era America. Among these films to emerge from Warner Bros. in this period were Wild Boys of the Road, I Am a Fugitive from a Chain Gang, Black Fury, and The Petrified Forest. In addition, the Depression-era wish fulfillment of the gangster films, most famously Little Caesar and The Public Enemy, and the backstage musicals of Busby Berkeley, including 42nd Street, Gold Diggers of 1933 and Footlight Parade, continued in this tradition of dealing with the social issues facing the nation during the Depression at the studio presided over by the pro-Roosevelt, pro-New Deal movie mogul Jack L. Warner.

Out of this milieu came 20,000 Years in Sing Sing, in 1932, a tough pre-Code drama starring Spencer Tracy and Bette Davis in their only picture together. The screenplay was based on the novel of the same name by Warden Lewis E. Lawes. It tells the story of a high-profile, big-time New York criminal (Tracy) who is handed a stiff sentence and sent up the river. His experiences in prison are much tougher than expected, although he gradually comes to respect the stern but benevolent warden. When Tracy learns that his sweetheart, Fay (Bette Davis) is in critical condition and may not have long to live, the warden allows Tracy to take leave from the prison on the honor system and go visit Fay so that they can spend their final hours together. The situation becomes complicated when Tracy learns that it was his friend, Finn (Louis Calhern), who was responsible for his Fay’s injuries, and has plans to double-cross him. 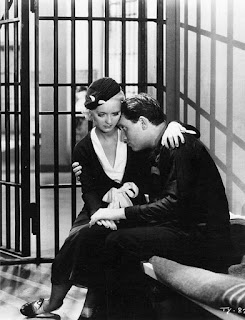 20,000 Years in Sing Sing is stylishly directed by Michael Curtiz, who made so many pictures for Warner Bros. during the ‘30s and really had a chance to hone his craft on film after film. Here, he makes a series of interesting choices that leave an indelible impression, such as prototypical-Noirish use of shadows created by the prison bars, which create a claustrophobic and imposing effect. Another brilliant choice is the use of on-screen text, superimposed above each of the prisoners marching through the prison,indicating the number of years for which they have been sentenced. This device creates a harrowing effect by highlighting the amount of time that these men will be spending behind bars. As a result of Curtiz’s expert direction, the taut and economic storytelling and crackerjack plotting, there is not an ounce of fat on the film, not a single wasted shot or unnecessary moment.

This film offers two early starring roles for Spencer Tracy and Bette Davis, who demonstrate a remarkable chemistry together. Tracy has an excellent opportunity here to display the kind of gentle, noble qualities that he would bring to all of his screen work. He has a remarkable ability to convey so much through his expressions. His subtle and understated performance achieves a totality of tone and characterization. Davis brings just the right mix of innocence and tragedy to her role as the girl Tracy loves and had to leave behind, and it’s easy to see the qualities in her performance here that would quickly make her a top star at Warner Bros. 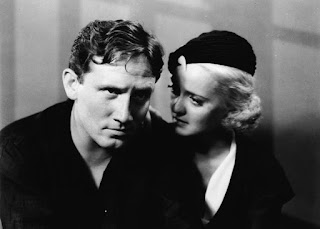 20,000 Years in Sing Sing is a great example of the gritty, socially-conscious films that Warner Bros. specialized in during the ‘30s. The time was definitely right for this type of film, with the nation embroiled in the depths of the Depression, of economic hopelessness and despair. Although things would soon begin to look up thanks to FDR and his New Deal, films like 20,000 Years in Sing Sing accurately captured the mood and concerns of a nation when it was at one of its all-time low points.
Posted by Matt Barry at 1:34 PM