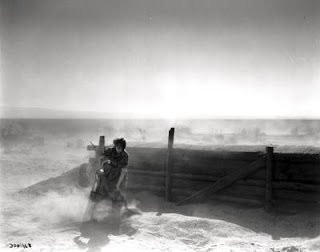 One of those glorious silent films that I was introduced to through Kevin Brownlow and David Gill's HOLLYWOOD series years ago.

Lillian Gish stars in one of her most stunning and brilliant performances as Letty Mason, a young woman from Virginia who travels west to live with an old family friend and finds herself plunged in to the wild, untamed landscape of the prairie with its relentless, driving, howling winds. The wind threatens to slowly drive Letty mad as she struggles to adapt and survive in this harsh new environment and to come to terms with her feelings about the man she has married.

This merciless, unforgiving environment becomes a character in its own right. Exterior scenes were filmed on location under extremely difficult conditions of sweltering heat and wind provided by a bank of airplane propellers. Gish oversaw every aspect of the film, choosing the great Swedish director Victor Sjostrom to helm the production, and acclaimed Swedish star Lars Hanson as her leading man.

One of the truly great American silent films. See the Photoplay restoration with an inspired score by Carl Davis.