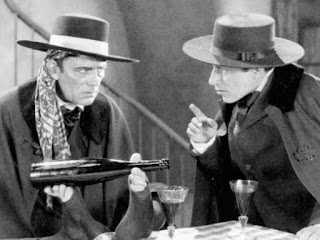 Lon Chaney is Alonzo, an armless knife thrower in a gypsy circus in old Madrid. He loves the circus owner's daughter, Nanon (Joan Crawford), who detests being touched by men (consequently rejecting the affections of the circus strongman) and only feels safe around Alonzo.

Little does she know that not only does Alonzo actually have arms (which he keeps tightly and uncomfortable bound in a corset), but he actually is a wanted murderer, easily identifiable by his deformed double-thumb on one hand.

After a brutal fight with the circus owner, Alonzo strangles him, and Nanon witnesses only the telltale double-thumb on the murderer's hand. Realizing that his future happiness with Nanon depends on concealing his true identity, Alonzo blackmails a surgeon into amputating his arms.

In his absence, Nanon comes to trust the strongman and to feel comfortable in his embrace. Alonzo returns from his surgery to the news that she and the strongman are to be married. He exacts his revenge on the strongman by sabotaging his dangerous new act, which consists of his arms being bound to horses running on a treadmill, and almost results in the strongman being torn limb from limb. When his beloved Nanon intervenes to save the strongman, putting herself in harm's way of the wild horses, Alonzo sacrifices himself to save her, finally being trampled to death under the horse's hooves.

It's the kind of gruesome, offbeat film that is hard to imagine coming from a major studio like MGM. It runs only 49 minutes -- a testament to giving just as much time as needed to tell the story without any padding or extraneous material. It's beautifully photographed by Merritt B. Gerstad, who shoots some of Crawford's scenes through a gauze filter. Chaney gives one of his best performances as Alonzo, bringing sympathy to the character even when overcome with homicidal jealousy. It's also a strong contender for the best film that director Tod Browning made in his career, bringing together his favorite themes with the highly accomplished visual storytelling that silent films did best.