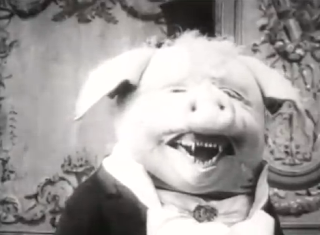 Utterly bizarre early film, from the Pathe company, of a popular vaudeville turn featuring a Belle Epoque dancer and a giant pig (rather, a man in a giant pig costume).

The pig costume is a sight to behold. With moving eyes, ears, snout, tongue, and mouth (which opens to reveal a row of sharp teeth!), it's an impressive -- and slightly terrifying -- piece of design. The film ends on a closeup of the pig, demonstrating the full range of its facial motions. One of the delightfully bizarre gems of early cinema.
Posted by Anonymous at 3:52 PM