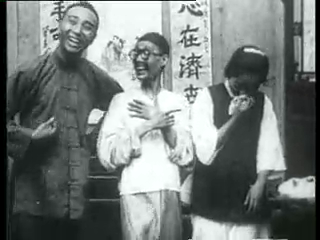 Silent slapstick comedy from China, starring Zheng Zhegu as a hapless fruit peddler in love with a doctor's daughter. The doctor (Zheng Zhengqiu) rejects his daughter's suitor -- unless he can drum up some business for his struggling medical practice, so the peddler sets about creating some accidents with his creative carpentry skills and a collapsing staircase.

Considered to be the earliest complete surviving film made in China, the film was written by pioneering Chinese filmmaker Zheng Zhengqiu and directed by Shichuan Zang for their Mingxing Film Company. The plot is reminiscent of some of Harold Lloyd's work, particularly NEVER WEAKEN (1921) in its use of staged accidents to bring in medical patients. There's much fun to be had with the collapsing staircase gag, and the comedy is fast-paced and frenetic, enhanced by moments of furious undercranking that heighten the absurdity of the proceedings.
Posted by Anonymous at 10:00 AM