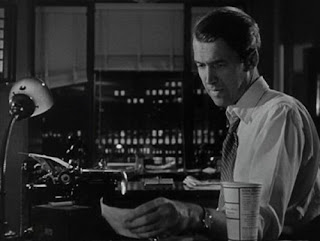 Post-war procedural crime drama with James Stewart as a Chicago reporter who sets about trying to prove the innocence of a man convicted and jailed for the killing of a policeman a decade earlier.

Often described as a film noir, it is instead a procedural similar to other post-war crime films such as THE NAKED CITY and Hitchcock's THE WRONG MAN, right down to its use of location filming for authenticity. Director Henry Hathaway takes a largely naturalistic approach to the story, which was based on true events of a man who was wrongfully imprisoned in Chicago for 17 years. He achieves this by shooting largely in the authentic Illinois locations, and showing the process by which Stewart proves the convicted man's innocence with a nearly documentary-like attention to the details, particularly in the lie detector test and the wirephoto technology.

The film is an interesting example of the transitional stylistic approaches of post-war filmmaking, both in the performances, with James Stewart appearing alongside a newer generation of actors such as Richard Conte and Lee J. Cobb, and in the cinematography, alternating between the natural lighting of the location footage with Joe MacDonald's high-contrast photography of the interiors shot on the Fox sound stages.

Posted by Anonymous at 9:07 PM