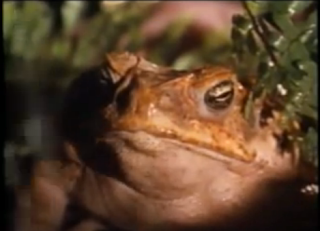 Quirky and offbeat doc by Mark Lewis about the toads that were introduced into Queensland, Australia in the 1930s to combat the cane beetles that were eating the sugar cane. It was quickly discovered that the toads had no effect on the beetles, however, and the toad population exploded, having a detrimental effect on the native habitat and posing a poisonous threat to animals and people alike.

Lewis interviews a wide variety of experts, scientists, farmers and other individuals who share stories about their encounters with the toads. Between the interview segments are re-enactments employing clever low-angle shots, placing the viewer in the perspective of the cane toad. The unusual subject matter is enlivened with a sense of humor, such as shots of the toads watching a house at night, accompanied by ominous music, or gathering outside on a patio under the porch light, while inside a man obliviously sings in the shower, unaware of the little amphibious predators that are watching him. An illuminating and entertaining look at this controversial pest species that continues to spread throughout Australia.
Posted by Anonymous at 5:49 PM