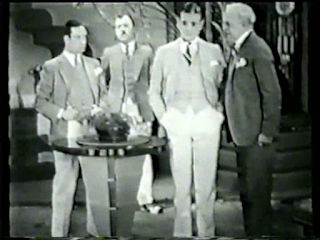 Roaring '20s farce about an affable and ambitious young stockbroker (Richard Dix) with a penchant for stretching the truth who enters into a bet for $10,000 that he can go 24 hours without telling a single lie, which predictably leads to all sorts of complications.

It's a fine premise for a comedy, with the bet providing a fun plot device reminiscent of BREWSTER'S MILLIONS. However, Victor Schertzinger's direction lacks the energy and quick pacing required of a madcap farce like this, not helped by the primitive qualities of the early sound technology, and Dix seems rather awkward in this rare comic turn. The production is enlivened by some nice art deco set design, pre-code dialogue (by William Collier Sr.), and good supporting cast including Berton Churchill, Helen Kane, Wynne Gibson and Ned Sparks. Produced by Paramount at their Long Island Studio in New York.
Posted by Matt Barry at 9:28 PM