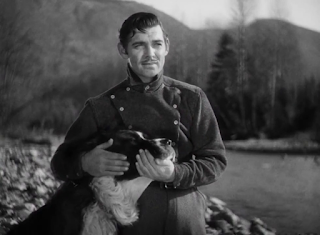 Rousing good adventure yarn, from the Jack London classic. The combination of director William Wellman and star Clark Gable is an inspired match for the material, bringing out all the rugged, masculine qualities of the story. This is exactly the kind of role Gable could play better than anyone else, and he gives one of his best performances here, achieving a real chemistry with co-star Loretta Young. Jack Oakie is the likable comic support, and he does his usually fine job in that capacity. The script, by Gene Fowler and Leonard Praskins, provides a winning combination of humor and romance between the action, and Wellman balances all of these elements expertly.

It's a handsomely-shot production, too, with location footage combined with indoor sets that convincingly give the impression of the great outdoors, greatly enhanced by Charles Rosher's striking cinematography. Special mention should be made of the excellent direction of the animal actors, too, especially of the expressive and really quite touching performance of the lead dog, Buck. Wellman's eye for expansive scenery and the natural beauty of the wilderness adds immeasurably to the power of this great film, really one of the best of its kind made in Hollywood.
Posted by Matt Barry at 11:21 PM