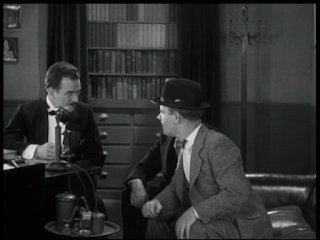 Famous for being the first 100% all-talkie feature film, LIGHTS OF NEW YORK is actually a rather tepid little crime drama, about a young, small-town rube who gets mixed up with big city bootleggers and is framed for the murder of a cop. The plot is the stuff of stock melodrama, so naturally everything turns out alright in the end.

Its slight construction can probably be attributed to the fact that it was originally planned as a two-reel dramatic short subject, which was later expanded to feature length. More interesting to observe is the staging of shots for the infant medium of sound film. Actors are frequently grouped together in close proximity to the microphones concealed on the set. Closeups and other cutaways are used sparingly, only occasionally achieving a real fluidity in the editing. Likewise, the performances are stiff and stilted, the dialogue often delivered with deliberate over-enunciation, which renders the gangland slang almost laughable at times (most notably when crime boss Wheeler Oakman ominously intones to his henchmen, "take him for...a ride"). The quality of the sound recording is quite good, but overall the staging is greatly restricted by the limitations imposed by the technology (though filming the scene of the policeman's murder entirely in silhouette is an interesting stylistic choice that takes advantage of sound effects). The film only really comes to life during the nightclub musical numbers -- particularly "At Dawning" performed by Harry Downing -- which brim with energy.

Though it is primarily an historical curio now, the film -- with its gritty urban backdrop, gangland slang dialogue, and "backstage musical" numbers -- often feels like a prototype for the kind of movies with which Warner Bros. would become identified during the early '30s.
Posted by Matt Barry at 5:22 PM