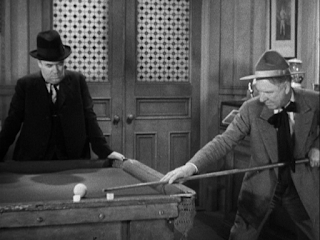 Delightfully zany, madcap comedy that serves as a vehicle for no less than six fine comic talents, the charming domestic comedy of Charlie Ruggles and Mary Boland, the verbal nonsense of George Burns and Gracie Allen, and the great character humor of W.C. Fields and Alison Skipworth. For its freewheeling, loose 62 minute running time, the plot is actually rather complicated: Bank clerk Ruggles and his wife Boland are setting off by car on their second honeymoon, and have advertised for another couple to travel with them to help share expenses. To their horror, they get stuck with Burns and Allen, who intend on riding with them all the way to California and proceed to turn the trip into a nightmare. Meanwhile, a fellow bank clerk has stolen a small fortune and smuggled it out of the bank in Ruggles' suitcase, and follows the couple on their journey in pursuit of the loot. The characters and situations all run into one another in a small-town hotel, run by Alison Skipworth and watched over by W.C. Fields as Sheriff "Honest John" Hoxley.

This fast-paced road comedy is directed with characteristic skill by the great Leo McCarey. It's the kind of leisurely--paced comedy where the plot can be put on hold for several minutes at a time while W.C. Fields regales long-time stooge Tammany Young with his rambling story of how he came to be known as "Honest John" (due to his returning a man's lost glass eye), or while Gracie Allen explains to George Burns that her niece has three feet (since she last saw her, she grew another foot). Rather than distracting from the plot, these isolated sequences provide some of the film's biggest highlights. Even with these interludes, the pace and energy never lag thanks to McCarey's expert direction, and when the routines are this good, who cares about the story?

Although he doesn't appear till nearly the last third of the film's running time, Fields very nearly steals the picture. This film was made during the height of his creative powers at Paramount, when he was alternating between his own series of starring vehicles, and appearances in ensemble comedies in which he shared the stage with other fine talents. His assured performance provides so many really funny moments, many of which appear to have been improvised or at least suggested by Fields, that he becomes the most interesting part of the film to watch. It's a tribute to the Great Man's talents that he was able to find so much to do with this role, which amounts to little more than a supporting part, and to inject so many memorable bits of business into his scenes.
Posted by Matt Barry at 5:04 PM