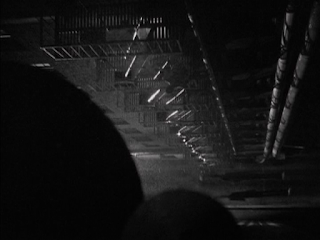 Atmospheric romantic drama written and directed by Ben Hecht, about a quartet of characters whose paths cross in a New York nightclub one fateful, rainy night and who are each changed by their experiences together. There is the struggling gambler looking for easy money (Douglas Fairbanks Jr.), the aspiring nightclub dancer looking for her big break (Rita Hayworth), the alcoholic playwright whose cynical exterior masks a broken heart (Thomas Mitchell), and the suicidal clerk (John Qualen) who has decided to end it all after being caught embezzling money from his employer.

Expertly photographed by Lee Garmes, who also receives a co-director credit, this is an imaginatively shot film that includes some interesting visual moments bordering on the Expressionistic, especially in the climactic fight scene that includes disorienting, canted camera angles. It's a surprisingly dark film -- both visually and thematically -- and though it resolves its characters' problems at the end, does not take the expected plot turns in reaching its conclusion.
Posted by Matt Barry at 8:24 AM