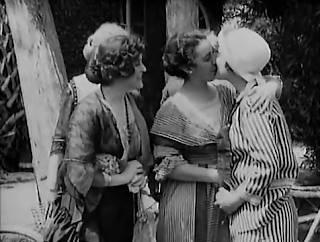 The same year that Mack Sennett made the landmark feature-length slapstick comedy TILLIE'S PUNCTURED ROMANCE, Sidney Drew directed and starred in this genteel, gender-bending farce for the Vitagraph company, about a woman (Edith Storey) who discovers some enchanted seeds that have the effect of turning women into men, and vice versa.

Notable for its bold subversion of sexual stereotypes, the humor is marked by Drew's clever sophistication and understated style. Drew and company have fun with the premise, and make the most of the farcical situations involving gender confusion and role reversals, which frequently retain their ability to be fresh and surprising (and which seem to have provided a model for later cross-dressing comedies such as Lubitsch's I DON'T WANT TO BE A MAN). The film also boasts some effective photography and a nice use of the Florida locations. With its attention to character and situations, it provides an interesting contrast to the roughhouse, knockabout slapstick most frequently associated with silent comedy, and is a fine example of Sidney Drew's talent as both a comic actor and filmmaker in a career that spanned more than 150 films over the course of a decade.
Posted by Matt Barry at 9:52 AM

Thank you for your website! Have a look at my quote:
https://traumundexzess.com/2017/04/01/lesbian-gay-queer/
We should stay in connection.
Klaus, Berlin, Germany