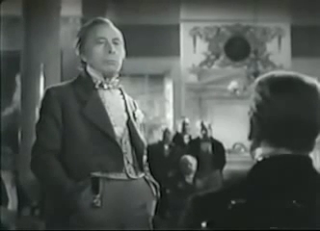 Stirring historical drama, lavishly produced by Darryl F. Zanuck, tracing the rise of the Rothschild banking family and their struggle against anti-Semitism in Europe during the Napoleonic wars. George Arliss stars in a dual role as Nathan Rothschild and his father, Mayer. Arliss's sensitive portrayal of Nathan, the central figure in the family, is the film's greatest asset, as Nunnally Johnson's script (adapted from the George Hembert Westley play) necessarily covers many events in a short amount of time, resulting in subplots (the romance between Loretta Young and Robert Young) and characters (especially Boris Karloff's Count Ledrantz) that feel underdeveloped, not helped any by Alfred Werker's slick and impersonal direction. Still, it's a powerful and handsomely-mounted production, and contains one of Arliss's finest performances (in a career filled with fine performances).
Posted by Matt Barry at 10:55 PM