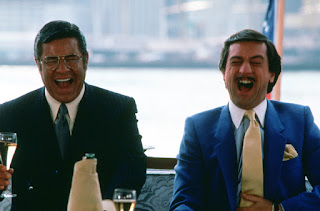 Watching The King of Comedy (1983) last night, I remembered reading that Scorsese had been influenced by Edwin S. Porter's Life of an American Fireman (1903) in thinking about his approach to making the film. I watched it partly with that in mind, thinking about how he might have drawn on that film for inspiration. One of the things I find most interesting about Scorsese is how he ingests the whole of film history and brings those influences to bear in such unexpected but effective ways.

This is what Scorsese had to say about the influence of Porter's film on The King of Comedy:
"People had reacted in such a way to Raging Bull, saying it was a beautiful film - like Days of Heaven, you could take every frame and put it on the wall - that I decided my next picture was going to be 1903 style, more like Edwin S Porter's The Life of an American Fireman, with no close-ups. So in King of Comedy that's what I tried to do." (quoted in Scorsese on Scorsese).

Wish I could of been there last night.