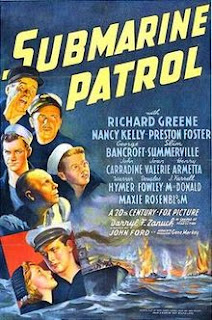 A minor John Ford film, especially in relation to his classics Stagecoach and Young Mr. Lincoln that he would make the following year. It's a lightweight adventure yarn about a ragtag group of sailors on a Navy sub chaser during WWI. Richard Greene and Preston Foster head up a fine ensemble cast that includes Nancy Kelly, George Bancroft, Slim Summerville, John Carradine, Elisha Cook Jr., and Henry Armetta, among others.

Ford's direction keeps the pace energetic and lively throughout, embellished with a characteristic sense of humor. There are some exciting action sequences, such as the sea battle and sinking of a German sub, which are impressively staged and heightened by excellent model work, especially in the undersea shots.

This is the kind of material John Ford could do so well, and though he would return to the settings and themes again, this seems to mark a turning point in his career. The light, freewheeling tone places it among his earlier work, specifically among his other Navy films like Salute (1929), Men Without Women (1930), and Seas Beneath (1931), rather than the films he would make during and after the war.
Posted by Matt Barry at 9:33 PM