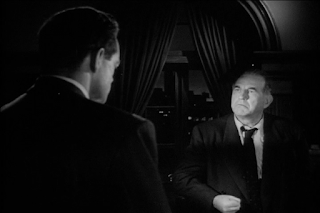 A powerful and at times excruciating drama -- written by Rod Serling from his own teleplay -- about the cutthroat office politics inside a big New York industrial firm, where the tension runs so thick one could cut it with a knife. Van Heflin plays a brilliant young executive from the company's Ohio office, who accepts a top position in New York, but soon finds himself being used as a pawn in a power play by the big boss (Everett Sloane) to force a principled, aging executive (Ed Begley) into resigning.

Directed by Fielder Cook with stark minimalism, and filmed on location in New York (in striking black and white by Boris Kaufman), Serling's screenplay boils with tension and anxiety, only occasionally becoming too self-conscious, and impaired by an ending that doesn't ring entirely true, but that does not negate the astonishing degree of honesty and poignancy that Serling establishes leading up to it.
Posted by Matt Barry at 10:19 PM