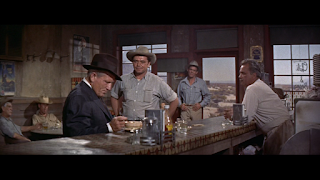 Violent, suspenseful modern-day Western, about a one-armed stranger, John J. McCreedy (Spencer Tracy), who shows up unexpectedly in a small, desolate town to investigate the mysterious disappearance of a Japanese farmer. The town has been all-but-abandoned except for a group of vicious, racist thugs who hold the locals in a grip of terror, even rendering the sheriff powerless. Tracy, finding himself up against a formidable cast of menacing tough guys, including Robert Ryan, Lee Marvin, and Ernest Borgnine, quickly figures out that the men don't want him poking around for fear of what he might find, and realizes he has to get out of town before he ends up their next victim.

John Sturges' masterful use of the Scope frame showcases the vast, bleak expanse of the Western landscapes, utilizing the large, sprawling spaces in unique ways to create a disorienting sense of claustrophobia. Sturges also handles the action sequences with characteristic skill, particularly the violent match in which Tracy brutalizes Borgnine with Judo moves, and the suspenseful show-down between Tracy and Ryan. Tracy is particularly effective in his role, bringing a world-weariness to the character that suggests he has seen a lot and is prepared to seek justice at any cost, and Borgnine stands out among the supporting cast, expertly demonstrating his range in playing a maniacal thug. The film benefits immensely from William C. Mellor's cinematography, Newell P. Kimlin's tight editing, and Andre Previn's rousing score.
Posted by Anonymous at 8:00 PM