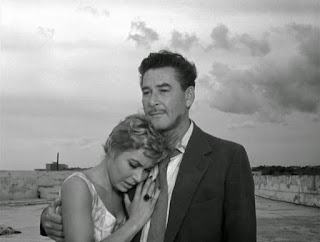 Tight, tough little thriller about an American croupier in Havana (Errol Flynn, in a fine late-career performance) who finds himself wanted by both the police and a crime syndicate after a mysterious woman passes him 500 counterfeit pesos over the gambling table one night. Flynn brings a subdued energy and quiet dignity to his role of the unlucky casino dealer trying to clear his name. Richard Wilson's skillful but unpretentious direction keeps the suspense strong and the story moving at a good pace through its many twists and turns toward the exciting climax at Morro Castle. Good location photography of pre-Castro era Havana by Lee Garmes adds to the atmosphere.
Posted by Anonymous at 8:26 PM