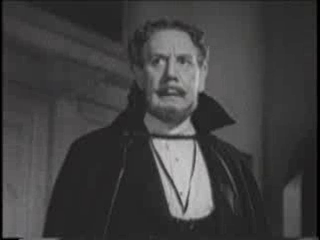 Atmospheric British thriller -- starring magnificent, eccentric screen villain Tod Slaughter in a characteristically fine performance -- about a series of mysterious murders by a killer known only as "The Wolf" that have left 1880 Paris in a grip of fear. The on-screen introductory text lets us know what to expect, describing the story as a "melodrama of the old school - dear to the hearts of all who enjoy either a shudder or a laugh at the heights of villainy".

Slaughter has a fascinating and commanding screen presence, conveying a grand, melodramatic villainy in the finest over-the-top theatrical tradition that he perfected on the Victorian stage. I first encountered his work in the 1936 film of THE DEMON BARBER OF FLEET STREET, and was captivated by his performance as Sweeney Todd. He became a familiar face in low-budget British thrillers of the '30s and '40s, with his macabre sense of humor perfectly suited to the tone of these films. Slaughter clearly had a great deal of fun with these juicy roles, while still managing to be genuinely terrifying when the story called for it. He's even afforded an especially garish death scene here.

The production is enhanced by a strong period atmosphere that belies the film's low budget. Good, exciting fun that never takes itself too seriously and is all the better for it.
Posted by Anonymous at 10:23 PM