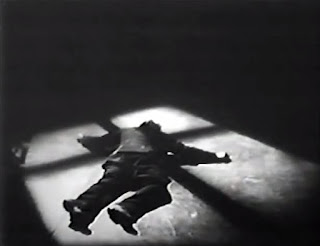 British part-talkie version of the Liam O'Flaherty play -- later famously filmed by John Ford in 1935 -- about an IRA member, Gypo Nolan, who has a crisis of conscience when he informs on a fellow party member, Francis McPhillip, wanted for murder, resulting in McPhillip's death at the hands of the police, and an ill-gotten cash reward for Nolan.

The great Swedish actor Lars Hanson offers an interesting interpretation of Gypo Nolan, quite different from Victor McLaglen's take on the character in the Ford remake. Hanson brings a real intensity to the role, conveying the character's haunted conscience and sense of guilt from the moment he betrays his comrade, and the knowledge of the inevitable fate that awaits him in return for his actions. This was also the final film of Hungarian actress Lya De Putti, who delivers a strong performance as Nolan's girlfriend, who has her own crisis of conscience when the IRA leaders come looking for him.

Made during the transitional period for sound film technology, it is an odd hybrid of silent footage (with music and effects) during the first half, and mostly synchronized dialogue in the second half (both Hanson and De Putti are somewhat distractingly dubbed). Arthur Robison's direction is most distinctive in the silent sequences, aided greatly by the high-contrast cinematography of Werner Brandes and Theodor Sparkuhl, and marked by a remarkably fluid use of the camera and editing, while the sound sequences are more stagy, too often bringing the action to a halt for the dialogue. The climax in the church is an exceptionally powerful and beautiful scene, with an effective combination of sound and image.
Posted by Matt Barry at 10:27 PM